skip to main content
Return to Fordham University
You are at:Home»Inside Fordham»Panel to Explore Dominican-Haitian Refugee Crisis
“An estimated 200,000 people are at risk of being rendered stateless.”
While media attention is focused on the refugee crisis in Europe, another refugee crisis continues unabated at Haiti’s border with the Dominican Republic.

On Tuesday, Dec. 15 at 6 p.m., Fordham will host a panel discussion on the many legal issues that have exacerbated the crisis, its human rights implications, and its humanitarian imperatives.

Dominicans of Haitian ancestry have been pouring over the border into Haiti since 2013. That’s when the Dominican government ordered that all Dominican Haitians must prove Dominican lineage with ancestral birth certificates dating from before 1929, or be expelled.

“An estimated 200,000 people are at risk of being rendered stateless,” said Marciana Popescu, PhD, an associate professor in the Graduate School of Social Service (GSS). 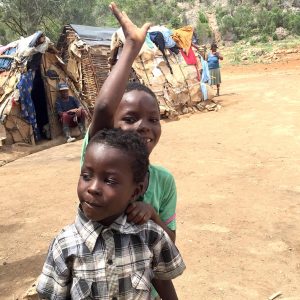 Dominican-Haitian refugees at the border.

Popescu said that birth certificates aren’t issued as rigorously on the island as they are in the United States. She said that the timelines for appeal were rigid and the process was not clear. Lack of information, in some cases, and low literacy levels in other cases, plus the difficulty of obtaining proper identification explained the decision of many to not challenge the Dominican laws.

In August, Popescu visited Haiti at the invitation of Fordham student Kara Lightburn and saw the crisis firsthand. Lightburn is earning her master’s degree from the University’s Institute of International Humanitarian Affairs (IIHA), and simultaneously spending time on the ground in Haiti. In 2010, she founded Social Tap, a New York-based nonprofit providing services through Haitian partnerships. The group is assisting Popescu with research on the refugee camps forming at the border.

The two women will present an assessment of findings next week.

The ambiguities created by the new laws, the political tensions, and the limitations of international definitions of refugees further complicate this situation. In the absence of a refugee status, no official refugee camps were set up. The haphazard arrangement has left the displaced population living in flimsy tents partially covered with tarps vulnerable to the elements.

“The rain comes in through top and bottom,” said Popescu. “The day after I left, the entire camp was flooded.”

Several people have already died of cholera, she said, since the refugees were not educated on the dangers of drinking untreated water.

While the Dominican Republic has not officially started deportation proceedings, Popescu’s research has shown that an overwhelming 86 percent of Dominican Haitians are returning to Haiti “spontaneously.” Additionally, the military and police have been routinely putting people in cars, taking them to the border, and leaving them there.
The refugees are heading to a country experiencing over 70 percent unemployment, so getting them out of the camps and integrated into the society will not be easy, she said. Further complicating the situation is that the tiny nation is in the midst of a national election.

“Until there is a new government, it’s not clear who is responsible for what,” she said. “One thing is certain, people want to move out of the camps. And while they believe that either the Haitian government or the international organizations should take responsibility, they don’t put much trust in either… and with the ongoing elections, they are left waiting. And for some, especially the infants and the elderly at camp, time is running out.”

The event is being co-sponsored by the IIHA, GSS, and the Leitner Center for International Law and Justice.