It’s estimated that right now 68 million people globally have been forcibly displaced from their homes, more than any time since World War II. With that movement comes innumerable challenges for host countries that allow refugees to settle in them.

It’s a topic of considerable interest this week as the United Nations convenes for its general assembly, and at Advancing Local Leadership in Today’s Global Refugee Crisis, a panel held on Tuesday at Fordham’s Lincoln Center campus, five leaders took a deep dive into challenges such as funding streams and leadership roles for local aid groups.

“The vast majority of displaced peoples are living within 10 countries. Three countries are responsible for almost 30 percent of that total,” said moderator Jeri Eckhart-Queenan, of the Bridgespan Group, a group that provides management consulting to nonprofits and philanthropists.

“The question needs to be, ‘What is the rest of the global community doing to shoulder its part of the burden, whether through funding or resettlement?’”

Francis Atul Sarker, executive director of Caritas Bangladesh, spoke of helping nearly 700,000 members of the Rohingya ethnic group, who fled to Bangladesh and other nations after facing persecution in Myanmar last year. Years of dealing with natural disasters over the last 43 years left his organization well prepared to deal with a new geopolitical crisis, he said.

“We are grounded, we know the social reality, we have a good understanding of the cultural context, the faith context, and the different stakeholders. That is how we are at the front with more efficiency and more effectiveness than others. That is our strength,” he said.

“But we understand that it is not going to be resolved soon, and there needs to be a new governance structure, and a new local economy where there will be participation, and also a kind of co-management of the entire response. It will not be easy for a country like Bangladesh, which is already a very land-poor country.”

Clarisa Bencomo, program officer for global grants at the Ford Foundation, echoed Sarker, saying that local actors need to play a leadership role in defining the response strategy. In fact, she said Caritas Bangladesh perfectly illustrated why this matters when her group ran into resistance when it tried to convince the Bangladeshi government to construct more resilient structures for the Rohingya.

“Having Caritas Bangladesh, with the local knowledge and influence and relationships, combined with a technical capacity in engineering, we were able to put together a structure that was accepted by government that was more resilient, safer, and more dignified,” she said.

“We need the system to allow for that to happen everywhere. We need predictable support and financing for local actors to play a key role. It can’t just be given to those who already do it, and that’s the way it is.”

When it comes to funding, Robert Baryamwesiga, commandant of Bidi Bidi, the second largest refugee settlement in the world, said Uganda, which is home to an estimated 1.4 million refugees, is integrating both refugees and host communities into its planning process, in an acknowledgement that displacement is no longer a temporary. Funding likewise needs to be approached more holistically, he said.

“You find that there are funds that are going directly to refugees, which is good. But refugees cover over 250 square kilometers of land, whereas staff are staying over 60 kilometers away. You expect them to move everything to refugees without transport, or without accommodations?” he said.

“The kind of funding that comes must address the conditions of the staff. As we know, hosting and managing refugees is actually like repairing broken hearts. You deal with very traumatized people. Your staff must be in a good state of mind. If you restrict the staff, and don’t give them good conditions, you have two traumatized groups.” 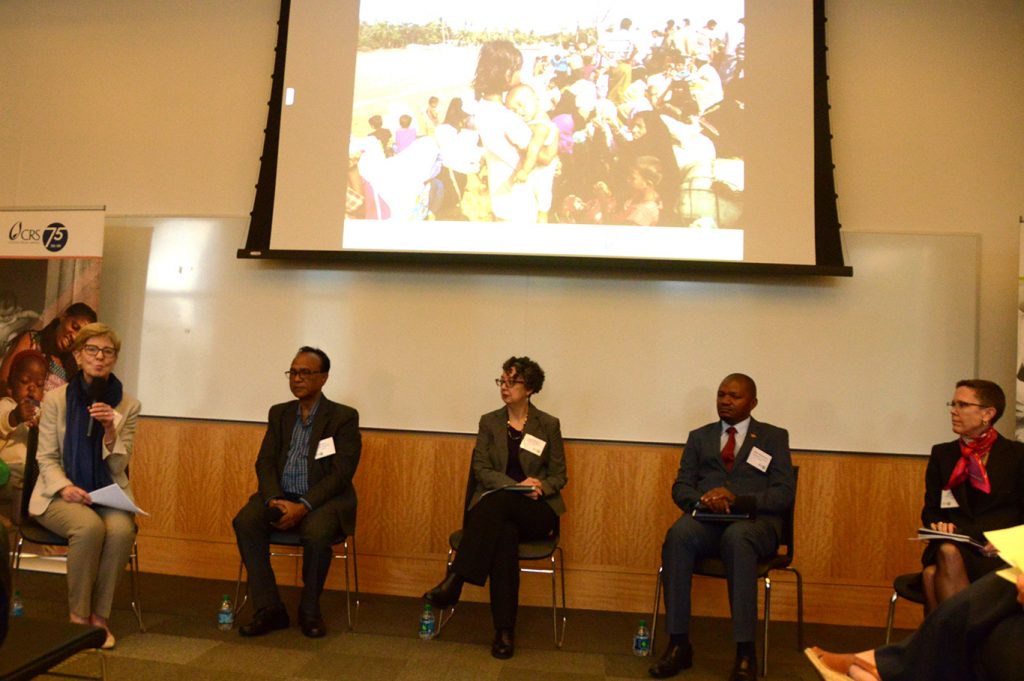