skip to main content
Return to Fordham University
You are at:Home»Inside Fordham»Pace: Job Is Not Done in War Against Extremist

America’s failure to commit to Afghanistan and Iraq for the long haul has created an environment in which extremists are once again creating chaos in the countries we sought to liberate from despotic regimes, a former chairman of the Joint Chiefs of Staff told a Fordham University audience this week. 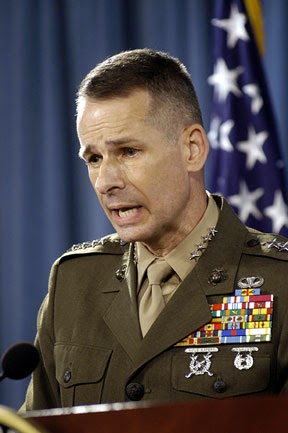 “When you go in and occupy a country, when you occupy Afghanistan, when you occupy Iraq, you take on a 40- or 50-year responsibility,” said retired Marine Corps Gen. Peter Pace on Nov. 19 following a leadership lecture at the Fordham Law School.

“Not four years or five years. Not ‘let’s go in, topple the government, give them a little bit of help’ and then say ‘good luck’ and leave.”

Pace served as the vice chairman of the Joint Chiefs under President Bill Clinton and chairman under President George W. Bush. Both men, he said, made thoughtful, considered decisions on the use of military force, but Bush’s decisions were not accompanied by a strongly made case to his constituents.
“President Bush could have done a better job of educating the American people about what this really means,” Pace said of the wars.
Click here to read the full story on Gabelli Connect.
Fordham UniversityPeter Pace
Share. Twitter Facebook Google+ Pinterest LinkedIn Tumblr Email