skip to main content
Return to Fordham University
You are at:Home»Inside Fordham»Lectures and Events»International Panel: Putin is Using Religion to Sustain War in Ukraine

On May 7, 2008, Father Peter Galadza was in Christ the Savior Cathedral in Moscow when Vladimir Putin made a bold entrance.

“He ensconced himself on the ambo in the center of the Royal Doors and delivered a thoroughly secularly speech extoling the fatherland and the church’s role in bolstering the fatherland,” said Father Galadza, the Kule Family Professor of Liturgy at Saint Paul University, Ottawa.

“Even during Romanov era the czar has never been allowed to speak from holy space of the Royal Doors.”

That “political intrusion into the sacred” became symbolic of the religious undertones of the ongoing conflict in Ukraine, which was the topic of an Orthodox Christian Studies Center discussion at Fordham’s Lincoln Center campus on Nov. 4.

“Putin’s campaign in Ukraine is tragic because the natural goodwill between Ukrainians and Russians that had predominated during period of Ukrainian independence is now being sorely tested,” Father Galadza said.

Because of the close ties between the Ukrainian and Russian Orthodox Churches, the Russian government has often employed religion to pursue its political aims, including fanning nationalistic flames within religious communities and even bringing criminal charges against clergy to pressure religious leaders.

“The fear is that Putin and the Russian Orthodox Church will swallow the Ukrainian Orthodox Church through the Moscow Patriarchate and bring Ukraine that way into Russia,” said Rabbi Yaakov Dov Bleich, the chief rabbi of Kiev and all of Ukraine. 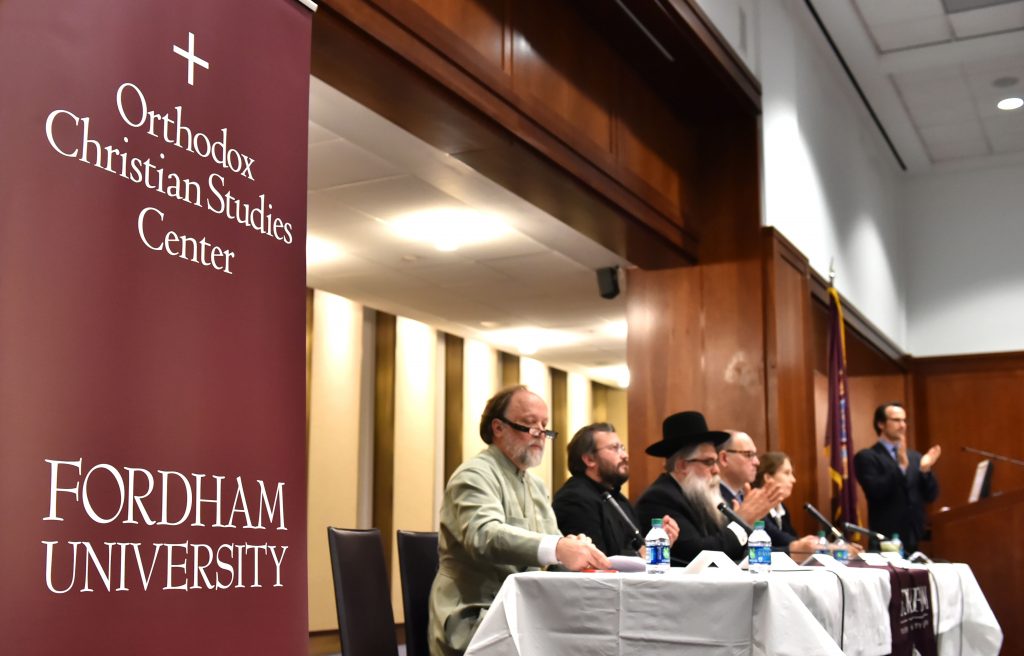 An international panel of experts discussed “Putin, Religion, and Ukraine” at Fordham on Nov. 4 (Photo by Dana Maxson)

Rabbi Bleich gave the example of his own experience in a government-organized group called the All-Ukrainian Council of Churches and Religious Organizations.

“We would come to meetings once a month and talk about essentially nothing because the agenda was set by government people,” Rabbi Bleich said about the organization, which has since claimed independence. “Basically, government took all the religious leaders, created an organization for us, then locked us in a room and threw away the key.”

The use of religion is just one smokescreen Putin has created to shape the ongoing conflict, said Adrian Karatnycky, nonresident senior fellow with the Atlantic Council. Another is to spread propaganda casting it as a “civil war.”

“By now it may have the elements of a civil war, but it is a civil war that was constructed from outside,” Karatnycky said. “There were only a few thousand people disgruntled and engaged in protest at first. Then there was a wave of trained fighters who came to reinforce them. Now this is a fight by a new group of people empowered by money and weapons from the Kremlin.”

In reality, the conflict is a military incursion, not a civil conflict, panelists said.

“There is no civil war. It’s a bunch of terrorists who are getting arms from people who have an interest in retaining the situation,” said Rabbi Bleich.

“People ask, ‘When will there be peace?’ It won’t be with Putin. Putin doesn’t want peace now. He wants the situation to stay the way it is — instability, a war economy, not allowing Ukraine to develop into a thriving democracy with its own economy, which will could dominate Russia.”