skip to main content
Return to Fordham University
You are at:Home»Inside Fordham»Lectures and Events»NY Times Columnist, Harvard Theologian, and Religious Historian Debate the Fate of Religion

Religion is on the decline and secularism on the rise, says mainstream media. But just how true is this statement? What exactly is secularism and is it really usurping religious faith?

A panel of experts took up the controversial topic at Fordham on Nov. 18. The inaugural Peter Steinfels and Margaret O’Brien Steinfels Lecture, “In Secularism We Trust? The Fate of Religion in the 21st Century,” was hosted by the Center on Religion and Culture (CRC) and moderated by Washington Post columnist E. J. Dionne, Jr.

The event’s main presenter, Molly Worthen, Ph.D., allayed fears that 21st-century secularism heralds the death of religion, saying that anxieties about the future of religion are “in no way new.” 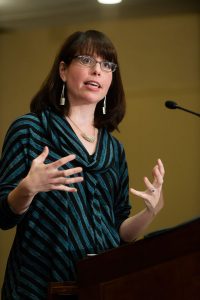 “There is a long tradition of prophets proclaiming the doom of traditional Christianity,” said Worthen, an assistant professor of history at the University of North Carolina at Chapel Hill. “What this means is that we have to think carefully about how to define the term ‘secularization’ and to handle this matter… with some caution.”

There are several ways to interpret secularism, Worthen said, for example: a shift from belief in the supernatural to knowledge of the scientific; the retreat of organized religion from the public space; or the recognition of religion as one worldview among many.

One indication that secularism is on the rise, she said, is the increased number of people known as “the nones.” These “spiritual but not religious” people neither ascribe to a religion nor consider themselves atheists. Another indication is the shift in mainstream American opinion and law on matters of sexuality, which Worthen said shows a “decline of those institutions’ authority over individual consciences.”

The question is: Why?

“The big reason is that [it]is part of a massive, civilization-wide decline in institutions in general,” she said. “It isn’t just churches and temples losing members—it’s rotary, civic clubs, unions, and more.”

“We have no concept of the physical pain and fear that our ancestors lived with on a daily basis… [of]the physical suffering that for thousands of years [drove]humans to seek consolation outside material existence,” she said.

Nowadays, we have “more reason to turn to our doctor than to our priest.”

“Spiritual but not Religious”

Harvey Cox, Ph.D. said that “secularization” was too “fuzzy” of a term to capture the nuances of the situation. He instead called it a transmutation of “religiousness.”

“There is a far more subtle set of changes going on—a change in the nature of what it means to be a religious person,” said Cox, the Hollis Research Professor of Divinity at Harvard University. “We’re all a mixture of religious, spiritual, and secular elements. People have taken a step away from the institutional, credal expression of religion as they understand it, while still considering themselves to be ‘spiritual.’”

New York Times columnist Ross Douthat cautioned panelists not to put complete faith in the trends, however. After all, he said, if someone 40 years ago had prophesied the future of religion based solely on the trends between 1960 and 1970, he might have concluded that by the year 2000 religion would have all but disappeared—which clearly is not the case.

Nevertheless, Douthat acknowledged that attitudes toward religion, including the “spiritual but not religious,” mentality point toward the de-institutionalization and individualization of religious life.“

If you’re looking to the future of religious experience and spiritual exploration, then it’s useful to spend some timing watching Oprah Winfrey, listening to Joel Osteen, or reading Eat, Pray, Love—the places where the spiritual, the pop-cultural, and the commercial intersect,” he said. 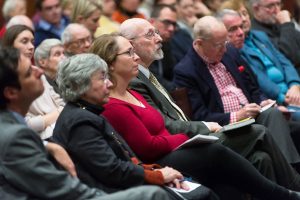 Peggy and Peter Steinfels with their daughter Gabrielle. (Photo by Leo Sorel)

The Nov. 18 lecture both marked the 10th anniversary of the CRC and honored Peter and Peggy Steinfels, the cofounders and longtime directors of the center.

“Under their leadership there have been scores of events of a relentlessly stunning quality,” said Msgr. Joseph G. Quinn, vice president for Mission and Ministry. “They have ensured that the vital connection between religion and culture has been and will continually be appreciated and nourished here at Fordham.”