Blow, who started his career at the Times in 1994 as a graphics editor, joined the op-ed page in 2008. His memoir, Fire Shut Up In My Bones (Houghton Mifflin Harcourt, 2014), caught the attention of the judges of the Sperber Prize, which is administered by Fordham’s Department of Communication and Media Studies.

It was the first time an African-American writer received the award and just the second time the award went to an autobiography. Blow’s memoir recounts his struggles growing up in a segregated, small-town in Louisiana, in a family to which drama was no stranger.

In his welcome, Joseph M. McShane, SJ, president of Fordham, noted that William Faulkner said that God created man because he loves stories.

“And where are our stories told better than in biography and memoir? You are a part of our life, you open life for us, you help us understand the stories that make God smile, and make life worth living and worth celebrating,” he said.

John Matteson, PhD, professor of English and legal writing at John Jay College of Criminal Justice, noted that readers of Blow’s op-ed column are accustomed to his use of statistics, surveys, and scientific studies to illustrate his writing.

But in Fire Up In My Bones, Blow’s coming of age story describes a quiet, introspective boy who couldn’t cry, but who nonetheless had a lot to cry about: poverty, de facto racism, family strife, and a fateful encounter with an older cousin that drove Blow to consider committing suicide and even murder.

It’s an intimate exploration of one person’s struggle that might otherwise get lost in the larger scheme of life.

“Numbers can help define a condition, but they can never give it a face. At the same time that they inform, they suddenly enable us, if we let them, to forget that every problem—in economics, politics, and sociology—is made up of individual stories, personal losses and pain that only the actual sufferer can know,” he said.

The Sperber award has typically gone to the stories of journalists in their heyday; Matteson noted that Blow’s book about his childhood was an exception.

“What he did, to his great credit, was to describe the sentimental education of a journalist . . . . The many wounds and false steps of his past that he narrates are used to explain how a consciousness and, more importantly, a conscience were formed.” 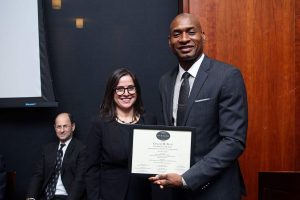 Jacqueline Reich, Chair of the department of communication and media studies, presents the Sperber Award to Charles M. Blow. Photo by Bruce Gilbert

Blow, in accepting the award, joked that he didn’t think he’d ever get used to people liking a book about a boy who’s poor, damaged, and living in a tiny, nearly forgotten town.

“The idea that people have connected to that kid and believe in him and can see him is just an incredible thing for me,” he said.

In a Q&A, he discussed his experiences with college hazing, his interest in graphics, and how his three children reacted to his memoir, which, for him, had been a challenge to piece a life into book form.

“If I were to write a novel, in some ways it would be easier, because I could make the person do whatever I want them to do,” he said.

“You can’t relive your life, though, so there are fallow periods that are not particularly interesting, and you have to figure out, ‘How do I keep the person engaged with the person who is me, even during the periods of my life that are pretty mundane?”

The Sperber Prize was established by Liselette Sperber to honor the memory of her daughter Ann, who wrote the definitive biography of Edward R. Murrow, Murrow: His Life and Times (Freundlich, 1986).

It is given to the best biography or memoir written by a journalist, and is judged by faculty at Fordham, Columbia School of Journalism, Trinity University, John Jay College, America Magazine, and by biographer Patricia Bosworth and Dr. Alan Sperber, Ann’s brother.

This year’s presentation was held in honor of Liselette Sperber, who died in August at age 103.