It’s not easy being a pioneer.

But Geraldine Ferraro, LAW ’60, was.  Her role as a trailblazer for women in politics was celebrated on Feb. 20 at Fordham’s Lincoln Center campus. 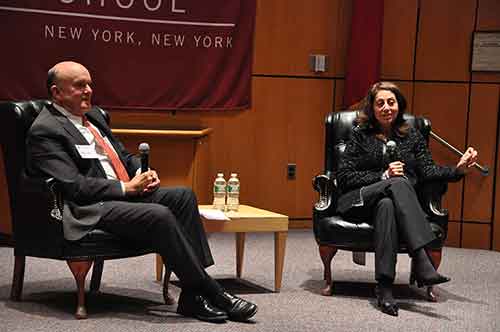 Ferraro, a longtime member of the U.S. House of Representatives and the first female vice presidential candidate for a national American political party, died in 2011 from multiple myeloma.

Zaccaro, a producer for the Today show, attended the screening with her father, John Zaccaro. She told the audience that she began the documentary before her mother received her diagnosis, but revisited it in earnest several months after her mother’s death.

The film, which will be aired on March 21 on the Showtime channel, features archival and personal footage and stills, as well as intimate interviews with friends, family, colleagues, and opponents.

It details Ferraro’s childhood in Newburgh, N.Y., the tragic loss of her father and older brother, and her education at Marymount Manhattan and Fordham Law School. Home videos detail her life as a stay-at-home mother, and her subsequent career of public service that culminated with her historic nomination to the Democratic national ticket in 1984 with presidential candidate Walter Mondale.

It also features some surprising revelations, such as the fact that then-vice-presidential candidate George H.W. Bush, whom she debated during the 1984 campaign, invited her to lunch after the election. The two of them remained friendly until her death.

The documentary’s main theme of the skepticism that Ferraro faced during her candidacy was based in no small measure on her gender, said Zaccaro. And, even though the Mondale-Ferraro ticket was roundly defeated by the Reagan-Bush ticket, it’s important to remember how Ferraro’s candidacy inspired other women to seek higher office.

In the film, former Secretary of State Hillary Clinton, whose 2008 presidential campaign Ferraro supported, credits Ferraro for “laying down a marker that we can’t go back on.”

Zaccaro said she wants the film to clarify and preserve her mother’s legacy and also be a teaching tool for future generations.

“When she ran for the Senate in 1998, her opponent at the time said all she really did was get nominated and then lose. We felt that was wrong. Though they lost, [the way]she conducted herself during that campaign changed what people in this country thought was possible for women.”

Zaccaro also said she wanted to tell her father’s story. Even though John Zaccaro rarely spoke to the press, never held public office, and kept his life private, his love and devotion contributed greatly to Ferraro’s success.

“I think people should understand what our family went through,” she said.

The ninth floor of the new Fordham Law School, which opens in September 2014, will be named after Ferraro, who was one of just two women in the law school’s 1960 graduating class of 179 students. The floor will house the clinical education suites—a tribute to the legal career she built fighting for victims of inequality and abuse.