skip to main content
Return to Fordham University
You are at:Home»Inside Fordham»New Course Offers a Peek Behind the UN Curtain

At the United Nations, how can a U.S. president advocate for Western, democratic values when some of the member nations only recently started allowing women to drive?

That’s the kind of conundrum that Fordham students are examining this fall in a new course, The UN and Global Leadership, that offers an inside take on the tricky process of building consensus at the United Nations building across town. 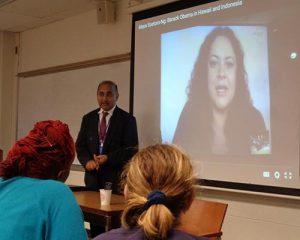 First taught over the summer by Iraq’s former UN ambassador, the course is being taught this term by Dinesh Sharma, PhD, an author, psychologist, and international correspondent who has many UN-related contacts.

Like, for instance, the sister of President Barack Obama.

Maya Soetoro-Ng, PhD—a multicultural education expert at the University of Hawaii and co-founder of a nongovernmental organization that works for peace—spoke to the class via teleconference on Sept. 28. As it happened, she was discussing the United Nations and peace-building on the very day that her brother touched on that same topic in an address to the UN General Assembly.

“It was just a treat for our students to speak with her,” said Fordham psychology professor Harold Takooshian, PhD, who was there. “It was a beautiful platform for her to talk about peace education and training young people.”

The class—part of the organizational leadership program, which Takooshian oversees—is one of Fordham’s latest efforts to leverage the proximity of the United Nations for students’ benefit.

Sharma’s background is well suited to the course. He has a doctorate in psychology and human development from Harvard, serves as an associate research professor at SUNY Binghamton, and covers President Obama’s global policies for Asia Times Online and other publications.

He’s also written two books on President Obama, which led Takooshian to seek him out as instructor. Sharma will focus on American leadership at the United Nations, as well as the cultural differences to be bridged there.

For instance, he said, “the UN charter and the human rights convention are part and parcel of western civilizational values, namely individual rights, individual property, ownership, the right to speak your mind,” he said. But applying these standards to Islamic societies or to Asian cultures “that may want to stress collective obligations over individual rights” poses difficult questions, which students will confront in class, Sharma said.

Also coming up, on Oct. 26, is a panel discussion on psychobiograpy—the study of how leaders’ behavior is shaped by their experiences—and discussion of how effective leadership is seen across cultures. One example is the more verbally busy leadership styles in the United States—“setting targets, meeting those targets, and then announcing that you have met those targets”—that wouldn’t be welcome everywhere, he said.

“In China, if you talk too much you’re seen as, potentially, not an effective leader,” Sharma said. “Effective leaders are seen as the strong and silent type.”

Cultural divides were one topic during the Sept. 28 teleconference with Maya Soetoro-Ng, co-founder of Ceeds of Peace, an NGO devoted to fostering peace-building and problem-solving skills in communities. 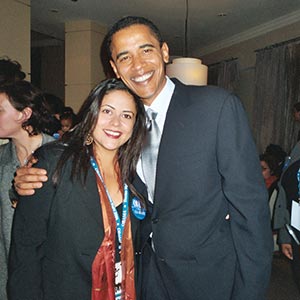 Maya Soetoro-Ng, shown with her brother

Among other things, she spoke about how she and her brother were raised by a mother—Ann Dunham—who was “very interested in global competency” and how that affected them both, said one student, Ann Leyden.

Also discussed was Dunham’s passion for promoting microfinance as a way to empower women in developing countries. In Dunham’s work, “you start to see how something so global could become more personal,” said another student, Jolette Crawford. “It shows just how, from the bottom up, communities can build and can grow and can become, I would say, instrumental in global growth.”