skip to main content
Return to Fordham University
You are at:Home»Inside Fordham»New Challenges to Legacy of 1964 Civil Rights Act

In the 50 years since Congress passed the Civil Rights Act, the United States has made remarkable progress toward achieving equality for all races.

But, according to Kristen Clarke, there’s work to be done to keep that progress from being overturned.

Clarke, bureau chief of the New York State Attorney General’s Office’s Civil Rights Division, delivered “Race, Justice and Democracy: The Legacy of the Civil Rights Act of 1964 and the Continuing Pursuit of Justice and Equality,” at Fordham’s Lincoln Center campus on Feb. 22 in conjunction with Black History Month.

Income inequality has become a real threat to racial equality, Clarke said. The 2008 economic crisis saw the median black household lose 84 percent of its household wealth, compared to 66 percent for Latinos and 34 percent for whites.

“We’re faced today with a criminal justice system that assumes that black and brown men are a threat, and gives a pass to those who wrongly act on those fears— even when using deadly force,” she said.

“Trayvon Martin stands as a powerful symbol of that. Stand Your Ground laws warrant closer examination.”

Voting rights are likewise under assault, as last year the Supreme Court struck down two core provisions of the Voting Rights Act of 1965, leading to 92 restrictive bills introduced in 33 states.
“It’s clear that we are turning the clock back.”

Clarke cited as inspiration civil rights leader Rep. John Lewis of Georgia, who said “If not us, then who, and if not now, then when?” 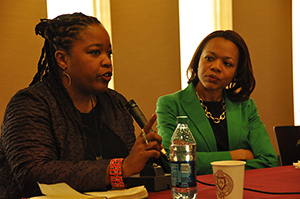 “Our work must be shaped by and responsive to the realities of ongoing discrimination, poverty, unemployment, homelessness and mass incarceration that too many communities continue to wrestle with,” Clarke said. “But we’re inspired by the possibility that, through aggressive and tireless civil right enforcement and collective action, we might close some of the gaps that persist today.”

Respondent Farai Chideya, a multimedia journalist and political analyst, challenged the audience to think about why such struggles are still happening 50 years later. She said there is a lack of love and empathy in the political arena, and cautioned that our emotional responses are as important.

“We can create all the laws in the world, but unless we deal with our love problem, we will not be able to apply those laws correctly,” she said.

Chideya noted that a recent poll showed that white Americans believe they are now more racially oppressed than blacks, whereas in the 1950s there was consensus among all races that blacks were more oppressed.

“Even though white Americans have lost less family wealth, they’ve still lost family wealth,” she said. “So the perception is, ‘I’m hurting,’ and there is this illogical shift to then say ‘I’m hurting, therefore it must be X’s fault.’”

From there, Chideya said, it’s a short leap from recognizing you’re losing a place of privilege to assuming that your very humanity is under assault. This perception led white Southerners to turn to violence during the 1960s and can be seen today in other Stand Your Ground cases.

“There’s no way that we’re going to dig out of the challenges we face today if we live in a resentment and revenge-based culture,” she said.

The symposium was moderated by Christina Greer, Ph.D., assistant professor of political science, and was sponsored by the Fordham School of Law and the Department of African and African American Studies.