skip to main content
Return to Fordham University
You are at:Home»Politics and Society»New Book Presents Novel Perspective on Border Crisis
When Reuters photographer Kim Kyung-Hoon published this image in November of a Honduran mother and her 5-year-old twin daughters on the Mexican side of the border wall, it “shook the media frame,” says Robin Andersen.

Photo courtesy of ReutersThere is more than one way to tell the story of what’s happening on the southern border.

Robin Andersen, Ph.D., a professor of communication and media studies, hopes to show how, with Media, Central American Refugees, and the U.S. Border Crisis: Security Discourses, Immigrant Demonization, and the Perpetuation of Violence (Routledge, 2019).

The key to understanding anti-immigration rhetoric in blaring headlines and incendiary tweets about an “invasion” of migrants illegally entering the United States from Mexico, she said, is to recognize the language as a “security discourse.”

The narrative starts with a “security” concern, which recently has been the southern border. It asks,What is causing this dire, fearful danger? Immigrants. When news starts from the position of fear of invasion, it must be assumed that those arriving at the border are inherently criminal; they are, after all, invaders, she said. “When news demonizes people who are refugees, they become the enemy; they become othered.”

The next logical step in this media framework is to focus on what security forces are doing to stop them, she said. We look to authority, in this case, the military, for protection.

“The way you open the story and start to talk about it dictates the way the story is going to be narrated in the press,” she said. 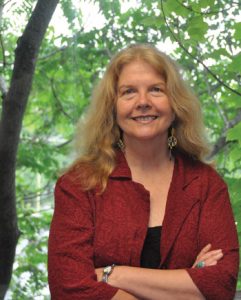 “Then we’re going to hear about the soldiers going down and putting up concertina wire and beefing up the border with more weaponry.”

Andersen noted that this is not a new phenomenon. In a 1983 television address, Ronald Reagan warned that unless a tough stand was taken against communism in Nicaragua, a “tidal wave” of “feetpeople” would be “swarming our country.” But a better way to tell the story, she said, is through a humanitarian discourse.

“If you turned the narrative around and started by asking, ‘What’s making it impossible for the people of these countries to stay there, prosper, to make a life for themselves? Why are they being murdered?’ Those questions would lead to a very a different narrative, and a very different news story,” she said.

“What is happening in the countries of Central America? What’s been the U.S. role there? After all, the U.S. has been policing the hemisphere for years. So, let’s take a look at what we’ve actually been doing.” 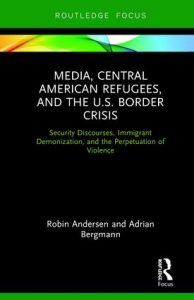 Andersen, who visited El Salvador as a graduate student in 1979, details in the book multiple instances over the last three decades in which she says the United States contributed to the instability of El Salvador, Honduras, and Guatemala, the so-called “Northern Triangle” of Central America.

To understand how the security discourse was embraced and repeated by major media outlets, Andersen, who co-wrote the book with Adrian Bergmann, a research fellow at the University of El Salvador, said one need look no further than the ominous warnings of an “invasion” that President Trump repeated about a caravan of immigrants making its way toward the U.S. in the months before the 2018 midterm elections.

What finally “shook the media frame,” she said, was the image of Honduran mother Maria Meza grabbing the arms of her 5-year-old twin daughters Cheili and Saira as they frantically ran from a tear gas canister spewing fumes on the Mexican side of the border wall. When it was published in November, Andersen said, news organizations began quoting from humanitarian aid and human rights organizations. Those perspectives are inherently different from security frames. Our concern was drawn to preserving life and dignity, she said, and we felt compelled to embrace those who have been persecuted in their own countries.

“We rarely discuss the ways in which our culture and our economics have been influenced by military discourse and military practices. We’ve lost a language of diplomacy and negotiation,” Andersen said.

What would a narrative that embraced a humanitarian discourse truly look like? Andersen said it would acknowledge messy truths such as those revealed in Dana Frank’s  The Long Honduran Night Resistance, Terror, and the United States in the Aftermath of the Coup (Haymarket Books 2018), which she cites in the book.

“We basically helped the military in Honduras depose a popularly elected president in 2009, Manuel Zelaya. That led to the complete destruction of the rule of law in Honduras. The cascading effect since then is that now it’s a dictatorship, and one of the most dangerous countries on earth,” Andersen said.

Today, she said, the exodus is being driven in part by the countries’ own leaders. Whereas urban violence is forcing many in Honduras to flee, she said, in Guatemala, indigenous people are being evicted from their lands by national security forces loyal to elites.

Multinational corporations controlled by those same elites are then moving in to exploit natural resources such as palm oil, biofuels, timber, and sugar cane, she said, adding that any story that addresses migration should also address environmental degradation and the extreme risks faced by those who resist.

Andersen expresses frustration with the Democratic party as well, which she said hasn’t mounted an informed, critical perspective in response to the president.

Instead of challenging the need for more border security, she said, what they say is, “a wall isn’t the best way to secure the border.” What they should be asking is, “What can we do to stop the dismantling of these countries, to stop the forced out-migration of refugees?’” she said.