skip to main content
Return to Fordham University
You are at:Home»Inside Fordham»Faculty Reads»New Book Challenges “Magic Carrot Approach” to Food Justice
Below: Watch a trailer of “More Than Just Food: Food Justice and Community Change”
As a nation, we’ve become increasingly aware of where our food comes from and how it is grown or raised, and the food industry—from producers to vendors—has responded with an abundance of products marketed for “healthy living” and “clean eating.”

Unfortunately, if you belong to the wrong demographic, then it’s unlikely you have benefitted from this cornucopia of healthful options, says Garrett Broad, PhD, an assistant professor of communications and media studies.

In his new book, More Than Just Food: Food Justice and Community Change (University of California Press, 2016), Broad takes a comprehensive look at the food crisis facing marginalized communities and how the industrial food system has exacerbated the problem. 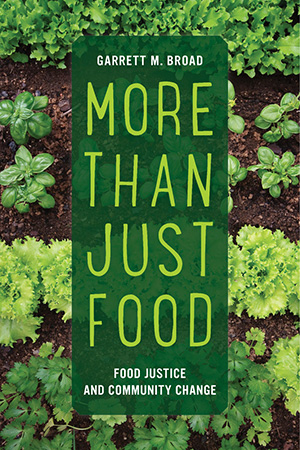 “Lower income communities have grocery stores that are more expensive and lower quality,” Broad said. “But the issue is about more than food… Inequity in the food system is not isolated from other inequities.”

Broad explained that there is an ever-widening food gap, as wealthier citizens enjoy a bounty of food options while historically marginalized communities are left to forage in “food deserts,” areas that lack access to affordable, high-quality food.

This disparity is no accident, Broad said. At the heart of food injustice is structural racism and socioeconomic inequality.

“Food is an entry point into a larger conversation about various social and political changes that can increase the health of our society. For instance, if we had better rent control, then people wouldn’t have to spend 65 percent of their income on housing and would instead have more disposable income to think about food quality rather than just low prices.”

Some groups, particularly large corporations seeking to “give back” to the community, have attempted to solve the problem by building more grocery stores or planting gardens in urban and underserved areas—a fix that Broad calls a “magic carrot approach” to solving community food access and nutrition problems.

“You can’t just plop a grocery store into a neighborhood without connecting it to other education strategies that reflect the food cultures of those local communities—especially if that store is too expensive,” Broad said.

The aim of More Than Just Food is threefold. First, Broad unpacks this complex issue and argues that it is rooted in systemic inequities and fueled by misinformation. Second, in doing so, he challenges “over-simplified and victim-blaming” narratives that fault marginalized communities for the diet-related health issues that disproportionately affect them, such as diabetes, heart disease, obesity, and metabolic disorders.

Finally, Broad offers suggestions about how to tackle the situation using a community-based approach. He offers the example of Community Services Unlimited, a South Los Angeles organization that began in the 1970s as the nonprofit arm of the Southern California Black Panther Party and has made significant strides in promoting urban agriculture and nutrition education.

“The conversation has to be about more than food. If all we’re talking about is food and nutrition and not race, class, and cultural knowledge… then all of this is just going to be window dressing.”