skip to main content
Return to Fordham University
You are at:Home»Inside Fordham»Military Times Names Fordham a Top School for Veterans 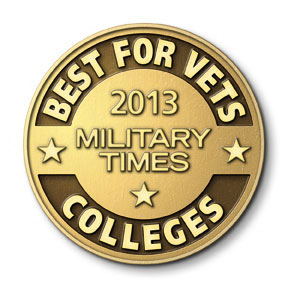 Fordham University is among the top 25 schools in the nation for returning veterans, according to the latest rankings released last week by Military Times as being “Best for Vets.”

Michael Gillan, Ph.D., associate vice-president and co-chair of FordhamVets Task Group, said the magazine’s 30-page 2012 questionnaire allowed space to added narrative content detailing improvements in the program—of which Fordham had many to report. He added that nearly 650 schools responded to the magazine’s survey.

The improved standing stems in part from the University’s commitment to the Yellow Ribbon GI Education Enhancement Program, an optional provision of the Post-9/11 GI Bill passed by Congress in 2009. The bill is considered the most comprehensive expansion of veteran education benefits since World War II.

Even though there is a national cap on the Yellow Ribbon benefits, the University has bypassed the limit and increased its commitment to cover all tuition and fees for Post-9/11 veterans.

Fordham was among the very first institutions to sign on to the program. In the most most recent 2011-12 academic year, the University’s Yellow Ribbon expenditure exceeded $300,000, and in the year ahead it is expected to reach $800,000. Enrollment by veterans across the University has shot up from a pre-2009 average of about 30 veterans, to a fall 2012 enrollment of 287.

Gillan added that one of the keys to the FordhamVet program’s success is that, although opportunities for affiliations with other veterans abound, student-veterans are by no means required to participate.

“What veterans share in common coming back from any conflict is that they want to get on with their lives,” said Gillan. “Although they want to be appreciated and recognized, many don’t want to be defined by the [service]experience.”

“They want to get on with being students.”