skip to main content
Return to Fordham University
You are at:Home»Editor's Picks»Measuring the Effects of Masculine and Feminine Traits on Voting
Monika McDermott will give a talk on her new book at Fordham at the Forefront on Oct. 18.
In 1976 Sandra Bem, an American psychologist, created the Bem Sex-Role Inventory, a test that gauged a person’s masculine and feminine characteristics regardless of their biological sex.

While psychologists have used the test extensively, it’s never been used by political scientists to gauge how those characteristics might affect the way people vote—until now. 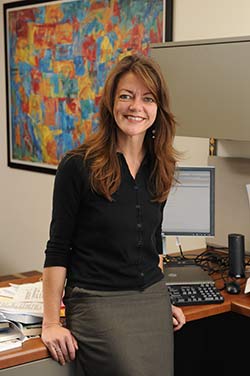 A new book by Monika McDermott, Ph.D., an associate professor of political science, explores the subject in Masculinity, Femininity, and American Political Behavior (Oxford University Press, 2016). Based on part on a study of more than 800 participants, the book delves into how political behavior can be influenced by gendered personality traits. It also demonstrates that biological sex does not necessarily dictate gendered personalities or partisan preferences as traditionally believed.

McDermott had heard the idea that certain gendered traits are associated with particular political parties, with the Democratic Party believed to hold a compassionate, feminine nature to the Republican Party’s tougher, more masculine nature.

“I started thinking of this in 2012 when I taught a class, Women in Politics, and we covered the idea of masculine and feminine voting—as opposed to biological sex,” said McDermott. “Most political science research involves biological sex. This is separate from that.”

Given that the course she was teaching focused on women, McDermott said the class roster skewed toward women. But when she administered the Bem test in class, she found that some of the women possessed more masculine traits, such as aggressiveness and competitiveness, than the feminine traits, such as compassion and gentleness.

“These were college-attending, career driven women in New York City,” said McDermott. “You have to have elements of competitiveness and strength to even come here.”

McDermott acknowledged that there is some criticism of the Bem inventory’s categorizations, but the categories still help define perceived differences between the two dimensions, she said.

It was then that McDermott began to contemplate a nationwide study. She designed a questionnaire that merged the Bem questions with questions on political attitudes and activities. That questionnaire forms the basis for her book.

“This is completely intuitive stuff, but we applied a quantitative method,” she said, adding that her students helped inspire the research. “It’s amazing that no one has applied it to political activity. Pundits talk about this, but there’s no one who has checked it out.”

McDermott said that her next study would be on how candidates’ gendered personalities may have an effect on voters—a topic she says is ripe for the upcoming election between Hillary Clinton and Donald Trump.

“You have people who have very obvious masculine traits, which is what we look for in a political leader, but there’s a cognitive dissonance for voters if the candidate is a woman,” she said.