skip to main content
Return to Fordham University
You are at:Home»Colleges and Schools»Fordham College at Lincoln Center»Mario Cuomo: Catholic Intellectual and Friend of Fordham

Cuomo received honorary law degrees from Marymount College and from the University, where he also delivered the commencement address for the Class of 1985. Of the many obituaries and tributes released in the wake of his passing, several noted the former governor’s affinity for the Jesuit philosopher Pierre Teilhard de Chardin, S.J. And while his progressive stance stole headlines, his Catholic sense of social justice took the fore.

Educated at St. John’s Preparatory School, St. John’s University, and later its law school, Cuomo enjoyed ribbing Fordhamites about the two schools’ rivalry—one a Jesuit school, the other Vincentian. In delivering the 1985 commencement address, the then-governor said that he didn’t take the rivalry seriously, even if his fellow alumni did.

“I allowed my first son to come to Fordham,” he said, referring to the current governor. Cuomo’s son Chris, a TV journalist and host of CNN’s New Day, also attended Fordham, earning a J.D. from the Law School in 1995.

Still, the governor couldn’t resist telling the tale of an old Vincentian priest whose cousin taught at Fordham. 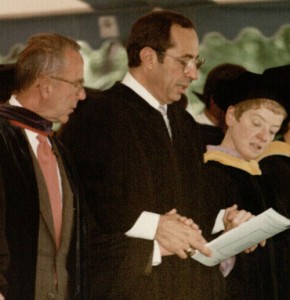 The governor delivered the Marymount commencement address in 1986.“The priest would shake his head mournfully when he spoke of his relative. ‘Yes,’ he’d say, ‘My cousin left the Church…and joined the Jesuits.’”

“The priest would shake his head mournfully when he spoke of his relative. ‘Yes,’ he’d say, ‘My cousin left the Church…and joined the Jesuits.’”

While the governor’s rhetoric was noted for its gravitas, it was usually leavened with humor. But on that spring afternoon, his humor shifted to concern for the world that the graduates would soon encounter. He spoke of a “threatened place, bleeding and broken, in pain.” And yet, he continued, the graduates were lucky in that they were graduating from “one of the finest private colleges in the richest nation on earth.”

“Probably—if you choose not to—you will never have to look into the face of an old man, uneducated, ill, alone in the winter, homeless, huddled on a heating grate in New York, or Detroit, or Chicago,” he began.

But he reminded them that a Fordham education doesn’t encourage such an existence of comfort and security “or even sanction it.”

“A Jesuit education asks more of you,” he said.

Cuomo returned to the same theme a year later at Marymount College when he spoke at their 1986 commencement.

“…Marymount’s tradition suggests, that, like faith, or love, or charity, success is only meaningful when it’s shared, when we look beyond our own welfare to the good of all, when we reach down to those who are at the bottom of the ladder and help them up—if only a rung or two.”

In both speeches Cuomo cited Teilhard, who as a paleontologist studied the “rock-hard realities of the Earth’s surface.”

“We may imagine that the Creation was finished long ago, and badly so, but that would be quite wrong,” Cuomo quoted Teilhard as saying.

“The process of creation continues still more magnificently all around us today,” the governor said. “We, you and I, serve to complete it, to complete creation, even by the humblest work of hands and our hearts.”