skip to main content
Return to Fordham University
You are at:Home»Colleges and Schools»Graduate School of Arts and Sciences»IPED Student at Epicenter of the Ebola Crisis

The July 29 death of Sierra Leone’s top Ebola doctor, Sheikh Umar Khan, from the disease intensified already-high fears about the epidemic that is overwhelming Western Africa.

“On a daily basis, Ebola regularly comes up,” said Kathleen “Ellie” Frazier, a student in Fordham’s International Political Economy and Development (IPED) program who worked this summer in Sierra Leone. “I overhear people discussing it on the street and there are awareness posters everywhere.”

Currently, Sierra Leone is the epicenter of an epidemic of Ebola, which causes high fever, vomiting, diarrhea, and sometimes internal bleeding. The highly contagious virus, for which there is no cure or vaccine, remains infectious even after a person has died. 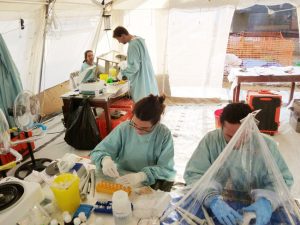 Frazier was stationed in a rural area of Sierra Leone as an intern at Timap for Justice, the country’s largest paralegal network. A former Peace Corps volunteer in Rwanda, she has worked extensively on social justice issues, especially in post-conflict regions. In Sierra Leone, she worked with Timap to develop organizational assessment tools and training materials, and observed paralegal activities in its various offices.

She was there just a week when Ebola cases began to emerge.

“In the first week I arrived, Ebola was confirmed in the eastern part of the country, marking its departure from the original area along the eastern border with Liberia and Guinea,” she said. Initially, she hesitated going to Timap’s rural offices. She even thought about leaving the country.

“But, with the exception of one mining company in the east, no one was evacuating their staff. The rural offices I was supposed to work in were not in the most heavily affected districts, so I decided to go.”

Frazier has not known anyone who has contracted the virus, although several Timap staff members fled a city with a major Ebola isolation unit after a prominent teacher there died. She said two of Timap’s offices in the east have been forced to temporarily suspend activities.

Frazier said that misinformation about the virus is rampant. Some Sierra Leoneans doubt it even exists, partly because Ebola symptoms are similar to the common diseases of malaria and Lassa fever. And there are some who insist the disease is a conspiracy, citing that the original contamination area is a stronghold of the opposition political party.

Conflicting messages early on from the World Health Organization (WHO) and Sierra Leone’s Ministry of Health and Sanitation caused further confusion, Frazier said. In more remote rural areas, villagers have even driven out WHO and Doctors Without Borders workers.

Fear also breeds misconceptions, she said. Because of the virus’ high contagion rate, those who test positive for Ebola are immediately transferred to an isolation unit, where loved ones cannot visit. If they die, their bodies are bagged and buried in a designated area, denying family members the opportunity to perform customary funeral rites. As a result, many people see going to the isolation ward as a “death sentence” and resist taking sick family members to health centers or hospitals.

“Some rumors go so far as to say that the wards are fronts for organ harvesting, or that they inject you with the virus once you are admitted,” Frazier said.

“Beyond individuals and families, it is likely that the districts most heavily affected will carry a stigma long after this outbreak subsides—whenever that may be.”

UPDATE: As of Aug. 1, Frazier had left Sierra Leone and safely relocated to South Africa. She is scheduled to return to New York at the end of the month.