Jason Gehrig, IPED Class of 2009, presented the results of his book, Water and Conflict, at the Woodrow Wilson International Center for Scholars in Washington, D.C., on Wednesday, January 6, 2010. 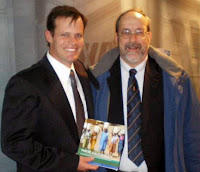 Ken Hackett, president of Catholic Relief Services, introduced Gehrig to an overflow audience. The session was filmed by C-SPAN for later broadcast (video here). Commenting on Gehrig’s work were Tjip Walker, Office of Conflict Management and Mitigation, U.S. Agency for International Development, Professor William E. Hall, from the Conflict Resolution Program at Georgetown University, and Geoff Dabelko, Ph.D., director of the Environmental Change and Security Program at the Woodrow Wilson Center. The moderator of the panel was Dennis Warner of Catholic Relief Services.

Gehrig’s book, Water and Conflict, was written with Mark M. Rogers and explores water’s complex role in development and conflict. It finds that water scarcity, access to water supplies, pollution of water sources and transboundary water management increasingly play a role in disputes, political manipulation and, in worst cases, outright conflict. In the course of these disputes, traditional community practices and human rights often are ignored and the natural environment may become degraded. The report challenges the development community to ensure that peacebuilding principles of equity, justice and reconciliation are applied to water conflicts to prevent and, if necessary, mitigate these situations.

During the question and answer period, the World Bank’s policy of promoting the privatization of water in Bolivia was discussed. This privatization effort led to the outbreak of violence. Gehrig suggested, that from his experience in Bolivia, community cooperatives might prove more effective in mitigating violence and in providing water to the poor.

Catholic Relief Services published the book and major funding for the research was provided by the U.S. Agency for International Development. While writing the book, Mr. Gehrig was a student in Fordham’s Graduate Program in International Political Economy and Development (IPED) and the holder of an Arrupe Fellowship.