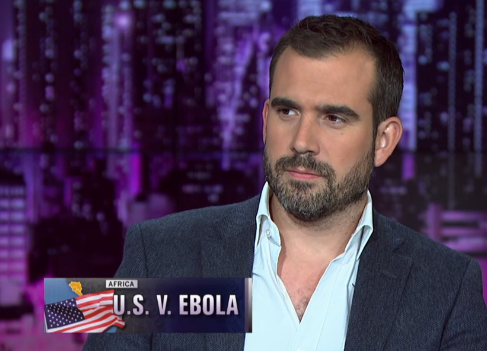 The institute aims to “educate a humanitarian workforce that will break the pattern of familiar mistakes,” such as paternalism, marginalization, or a top-down manner of doing things that hinders rather than helps.

In recent days, the public has seen the IIHA’s pedagogy in practice through Alexander van Tulleken, M.D., IIHA’s Helen Hamlyn Senior Fellow. who has been a mainstay in the media during the current Ebola epidemic. Van Tulleken has done countless interviews since the news about the ebola epidemic caught fire in the Western media, and more so when the first case of Ebola was diagnosed in the United States on Sept. 30.

On Oct. 3, when CNN’s Ashleigh Banfield asked van Tulleken about the four people close to the Texas man diagnosed with Ebola, who are now being forcibly quarantined in a Dallas apartment, he espoused the Jesuit value of homines pro aliis (men and women for others):

“The reason I say it’s sinister when you hear about the legal enforcement [is because]when that’s the main tool, that isn’t going to work for large numbers of people, and that’s what worries me.”