skip to main content
Return to Fordham University
You are at:Home»Inside Fordham»In Brief: Bloomberg Businessweek Ranks GBA Among the Best 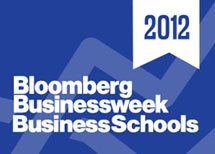 For the first time, Bloomberg Businessweek has ranked Fordham’s Graduate School of Business Administration (GBA) among the best business schools in the country. Of approximately 2,000 business schools nationwide, the magazine whittles the list down to the top 63 institutions. Fordham was listed No. 58.

Gautschi called the ranking a “breakthrough” and credited improved selectivity and a jump in GMAT scores from 587 in 2010 to 647 in 2012 with the GBA showing.

“This will assist in both faculty and [administrative]hiring and the school will also be taken more seriously by our peer institutions,” he said.

GBA set out to improve rankings as an imperative for the school, and established a task force chaired by Iftekhar Hasan, Ph.D., the E. Gerald Corrigan Chair in International Business and Finance.

“We want to use this as our beachhead and keep moving up,” Gautschi said.