skip to main content
Return to Fordham University
You are at:Home»Inside Fordham»Government Role in Healthcare: Nanny State or Helping Hand? 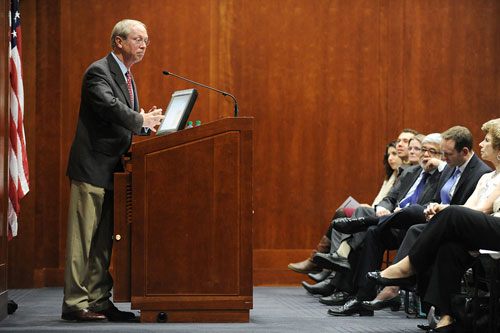 What responsibility does government have in maintaining public health? How should officials and citizens approach that question? James Knickman, Ph.D., FCRH ’72, presented a balanced view of the current health care debate, contextualizing it in philosophic, economic, psychological, and historic terms.

Knickman, president and CEO of New York State Health Foundation, made his remarks at a lecture sponsored by the Fordham University Science Council on April 4.  The talk, titled “Whose Responsibility? The Role of Government in Keeping People Healthy,” provided a framework within which respondents argued either for the “common good,” or for “personal liberty” in health care.

“I care about the poor,” said Knickman, “I’m a 1960s person and I learned those values here at Fordham. But I am also a practical thinker.”

Nevertheless, he set out a philosophical framework from which the ideals of communal responsibility and personal liberty spring, and how they relate to the ongoing debate.

“The biggest culprit in the food chain is sugar, especially sodas,” he said. “It shouldn’t surprise anyone that Mayor [Michael] Bloomberg would want to do something about it.”

New York State currently spends about $7 billion to $8 billion a year on obesity health care, making it an issue where “social costs are spread out over society.”

And while the national debate whirls around how much the government should or should not be involved in the public health, by subsidizing the soy and corn that eventually finds its way into calorie-laden food the government is already creating a policy that affects public health, he said.

“You have a public policy problem, and then there’s the aggressive marking of unhealthy food that is affecting kids,” he said.

Government actions, like Bloomberg’s soda ban, can be construed by some as “nanny state” tactics, he said. Arguments include concerns as to whether such actions are “capricious,” whether they are “really worth it,” and whether society should study the problem further before it acts on restrictive legislation.

But Knickman presented liberal philosopher John Rawls as the ideal, saying that Rawls would “vote for inequality only if it benefits the least in society.”

“His ideas really capture what I learned here at Fordham,” he said.

“In the social arena, government is getting a very bad rap for disease prevention,” she said.

But city governments have always played a role in public health, she said. In the 18th century, the city of Philadelphia’s policies stemmed the spread of yellow fever. She noted the roles that cities took in creating central bodies, like state boards of health, as well as in creating public hospitals.

“How can the city not step into the breach and address the chronic threat of disaster?” she asked.

Falguni Sen, Ph.D., professor at the Schools of Business and director of the Graduate School of Business Administration’s Global Healthcare Innovation Management Center, asked whether it was necessary for the role of government to change “because the nature and need of healthcare is changing so radically?”

Sen made a distinction between the delivery of health care and the promotion of good health. He argued that markets frequently failed to allocate health care resources effectively and agreed that government has a role.

“The promotion of good health is the direction we’re really going, because poor health is costing us a lot of money,” he said. “Government has to come in to take care of these externalities.”