skip to main content
Return to Fordham University
You are at:Home»Inside Fordham»Former Joint Chiefs of Staff Chair Shares Story of Rise to the Top

Admiral Michael G. Mullen, 17th chairman of the Joint Chiefs of Staff, advocated for a more robust use of diplomatic power in a wide-ranging talk at Fordham’s Rose Hill campus.

In “Reflections from the Top,” which he delivered on March 25 to a capacity crowd in Tognino Hall, Mullen, who held the highest rank in the U.S. armed forces from October 2007 to September 2011, cited his 27 visits to Pakistan during his tenure as an example of one way to build diplomacy with the head of the Pakistani Army.

The diplomatic tactic took center stage when Mullen had to speak with the Pakistani general following the killing of Osama Bin Laden, he said.

“It was a great night for us but [it]wasn’t his best night,” he said, noting how having already built a strong relationship beforehand made diplomacy in a delicate international incident much more possible.

“The requirements for us to engage and have relationships, particularly among militaries all over the world, are going to continue to grow.”

Mullen noted that the central theme of a course he’s currently teaching at Princeton University, U.S. Diplomatic Power and U.S Military Power: Achieving the Right Balance, is that the United States has become too militarized.

“It’s become too easy to use the military. I can’t tell you the number of meetings I’ve been to in Washington, D.C., where everybody in the room is a military expert, and I’m the only one in the room that’s sitting in a uniform,” Mullen said.

He embraced a “three legged stool” model of counterinsurgency strategy promoted by General David Petraeus in Afghanistan that emphasizes simultaneous improvements in development, security and governance.

“It provides security, yes, but it is also supports good governance. It’s the good governance piece and the development piece, and if you don’t get that moving, then the security piece isn’t going to make a difference,” he said.

In spite of his achievements, Mullen noted that his was not a smooth ascension through the military. He loved figuring out how to hold himself accountable for the ships he commanded in the 1970s, but he also found it challenging. He also admitted that there were times when he “failed miserably.”

“That issue of accountability, leadership, and responsibility for your mission and your people had an extraordinary impact on me,” he said. “I learned so much more when I failed than when I succeeded, and it was less about the incident or the situation in which I failed, and a whole lot more about what I did after. Did I give up? What did I learn? Was I a better person because of that?

“Those lessons have stuck with me to this day.” 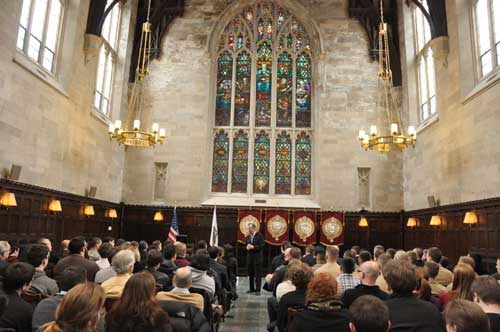