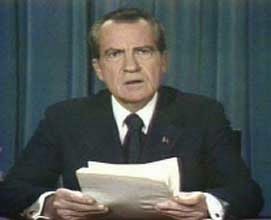 When President Richard Nixon announced his resignation 40 years ago on Aug. 8, 1974, it brought shock and amazement but also, for some, “a sense of relief,” said Communications Professor Emeritus William J. Small, a luminary of the news business who oversaw Watergate coverage for CBS News and later served on the Fordham faculty.

“This is now behind us” was the view of some commentators, said Small, who was a senior vice president at CBS when Nixon resigned. He didn’t recall being surprised—“I mean, the man faced impeachment”—but acknowledged that there was uncertainty about what Nixon would do in the face of the crippling scandal.
“People were amazed” at the president’s resignation, he said. “It was considered an option, but I don’t know anyone who knew when it would happen, or even for sure that it would. His people were still bravely talking about surviving the impeachment attempt—whatever people were left at that point.”
Small was interviewed on the occasion of being named for a Lifetime Achievement Award that he will receive at the 35th Annual News and Documentary Emmy Awards at Lincoln Center on Sept. 30. He was Fordham’s Distinguished Felix E. Larkin Professor and director of the Center for Communications at the Graduate School of Business Administration (GBA) from 1986 to 1997, and served as dean of GBA dean from 1992 to 1994. He went on to serve as chairman for news and documentary Emmys for the National Academy of Television Arts and Sciences.
Watergate was one of the dominant stories during his stint as Washington bureau chief for CBS News from 1962 to 1974. “We were always playing catch-up” to theWashington Post, but weren’t too far behind, he said.
Ben Bradlee, the Post’s executive editor at the time, once told Small of the importance of CBS’s Watergate coverage. “He said other papers were afraid to touch that story at the beginning,” Small said. “Those papers wouldn’t pick it up, he said, until CBS started, and then it became a national story and (the Post) became the heart of it.”
“[Bradlee] was very gracious about the role we played,” Small said. “We did a lot of original reporting … and I was very proud of the way (our reporters) followed it.”
Small received an honorary doctorate of humane letters from Fordham in 2003, and continues to take courses in the University’s College at 60.
—- Chris Gosier