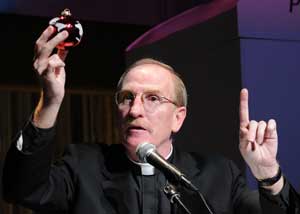 The holiday season kicked into high gear at Fordham on Dec. 3, as nearly a thousand members of the University community gathered at Lincoln Center for the annualPresident’s Club Christmas reception.

The event, which was held in the promenade of the David H. Koch Theater at Lincoln Center, was an occasion for alumni, faculty, and administrators to reconnect and celebrate the progress of the University’s capital campaign.

Excelsior | Ever Upward | The Campaign for Fordham, is $460 million toward its $500 million goal, with 96 percent of the total raised in the last fiscal year coming from members of the President’s Club.

Joseph M. McShane, S.J., president of Fordham, used the occasion to wish attendees a “Happy Feast Day,” as Dec. 3 is the day that Jesuits celebrate the life of St. Francis Xavier, one of the founding members of the Society of Jesus.
It was Xavier who St. Ignatius of Loyola instructed to “go forth and set the world on fire,” when he sent him off to Asia to preach the Gospel, Father McShane said. Therefore it was an auspicious time to embrace that proclamation.

“Today we Jesuits celebrate this man with great, great fervor and a great joy, and this morning we greeted each other in Spellman Hall and in houses of the society all around the world not with ‘Good morning,’ not with ‘Hello,’ but with, ‘Happy Feast Day.’ So I say to all of you, ‘Happy Feast Day,’” he said.

“Through your goodness and your generosity, you have made it possible for Fordham, this great work of the society, to continue to do what Ignatius asked Xavier to do, to set the world on fire by touching hearts, changing lives and transforming the world, one heart, one life, one student at a time.”

The transformation of Hughes Hall at the Rose Hill campus and the construction of the new Law School building at the Lincoln Center campus are two of the obvious results of attendees’ generosity, he said. Students also benefit from the example that Fordham’s donors set for them.

“They selflessly give themselves in service to others. They do it day in and day out. The do it in India. They do it in Central America, they do it in Latin America, South Africa, and right now for the past month, they’ve been doing it in the most devastated parts of the metropolitan New York area, going out on midnight runs, on daily work details to Breezy Point, Belle Harbor, the South Shore of Long Island, to Staten Island,” Father McShane said.

“They do this because they have learned generosity of heart from you.”

Angelo Labotte, FCRH ’12, a recent graduate who majored in history and anthropology and currently teaches 7th and 8th grade social studies at Bronx Early College Academy as part of Teach for America, was attending the reception for the first time.

“What’s going to happen after Teach for America, I’m not sure, but Fordham equipped me with a lot of skills, so I’m sure I’ll do something that’s worth while,” he said.

Joseph Siano, GSB ’04, said it was getting harder every year to carve out time to attend the reception, but found it was worth it. Siano majored in finance with a minor in economics and math at Gabelli, and currently works at SIR Capital.
“It’s a great chance to catch up with old friends,” he said.

This was the 10th year of attendance for Edward Winkler, FCRH ’67, LAW ’72, a retired colonel in the U.S. Army and a 2008 inductee into the Ram Battalion Hall of Fame.

“The thing about Fordham is you realize how valuable it is the further away you are from it. You realize when you go back how much you use what you learned in those four years,” he said.

“You’re always glad to see people, and, of course, the older you get, the more that’s required [of you]to see them. But it’s great; I’ve connected with people here who I haven’t seen in years.”