skip to main content
Return to Fordham University
You are at:Home»Inside Fordham»Fordham Theology Professor Lauded with Award for First Book 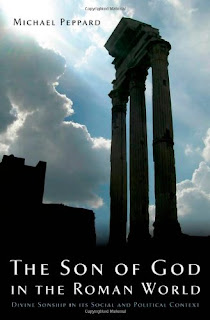 Michael Peppard, Ph.D., an assistant professor of theology at Fordham, has won the prestigious Manfred Lautenschlaeger Award for Theological Promise.

Peppard is one of ten junior scholars of theology and religion from around the world to win the award, which is administered by the University of Heidelberg in Heidelberg, Germany.

The award, which had previously been funded by the Templeton Foundation but was renamed this year in honor of its new benefactor, is based on a scholar’s first book and other application materials, including detailed evaluations by two full professors of an applicant’s choosing and an international committee of evaluators.

Peppard’s book, In The Son of God in the Roman World: Divine Sonship in Its Social and Political Context (Oxford University Press, 2011), examined in detail the term “Son of God” and the concept of divine sonship as it appeared in Christian theology during the Roman Empire.

In addition to a reception, Peppard will meet with the other winners to form proposals for collaborative colloquia. Two of these proposals will then be funded by the foundation.