skip to main content
Return to Fordham University
You are at:Home»Inside Fordham»Fordham Schools of Business Panel Focuses on Healthcare Overhaul 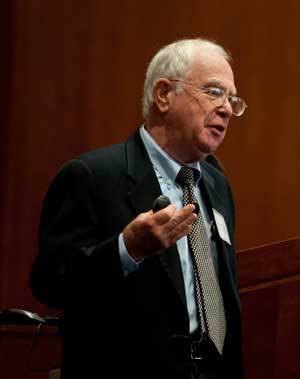 The sprawling, ungainly beast that is the U.S. healthcare system was the subject of a daylong roundtable discussion held at Fordham’s Lincoln Center campus on May 2.

“Determining the Value of Healthcare—A Multi-Stakeholder Perspective,” brought together experts in medicine, public policy, and business who are working to improve the nation’s healthcare system for both providers and patients alike.

In attendence were doctors and representatives from New York Presbyterian and Beth Israel hospitals, the fields of insurance, academia, medical device manufacturing, entrepreneurs, and information technology.

Falguni Sen, Ph.D., director of the Global Healthcare Innovation Management Center, advocated looking beyond the notion of efficient and effective healthcare and embracing “the value of good health” even though the problem of measuring it would be difficult.

“The notion of good health varies from country to country, from sub community to sub community within the country, and its complexities from lifestyle and other socioeconomic factors get very difficult to capture,” he said.
“This is the objective we would like to work towards over the next few years.”

In his keynote address “State of Healthcare Reform,” Stuart Altman, Ph.D., professor of National Health Policy at Brandeis University, laid out the challenges that lie ahead, as the Affordable Care Act, widely known as “Obamacare,” goes into effect in 2014.

Because the law lies somewhere between a government-run single-payer system nor a privately-run voucher system, Altman said it’s not surprising that problems have arisen.

What is surprising though, two years after it’s passage polls show that only 42 percent of Americans think it will benefit the country. Some of that can be attributed to the fact that 85 percent of Americans will be largely unaffected by it because they already have some form of health insurance, he said.

One area that will require future attention is Medicaid. The U.S. Supreme Court allowed states to opt out of the expansion of Medicaid, even though, Altman noted, 50 percent of Americans who would be gaining insurance would be getting it from that program.

“We are not going to have universal coverage even if this works perfectly, because there are people that are going to fall through the cracks big time in some states,” he said.

Altman said that healthcare spending is expected to only grow by about $90 billion, or 2 percent of what the nation currently spends by 2019, and will reach 20 percent of our gross domestic product (GDP) by then.

The problem with attacking rising health care costs, he noted, is that all major health care groups would have opposed Obamacare if they were simultaneously tasked with providing universal coverage.

“It’s easy to dismiss it, but politically it is dynamite. So what the Obama people did was the same thing we did in Massachusetts, which is to say ‘Let’s deal with coverage first, and then let’s deal with health care second,’” he said.
“Cost containment, ultimately, is very important, but I think the government was right in not trying [to reduce spending]directly at that time, or we would have passed nothing,” he said.