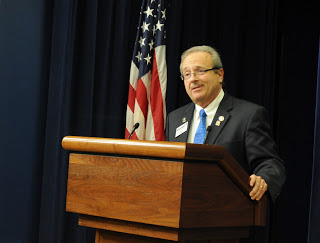 Fordham General Counsel brought some maroon to the White House on Sept. 21 for the inaugural Kiwanis International Day.

Thomas DeJulio, LAW ’77, who serves as general counsel for the University and is this year’s president of Kiwanis International, played a leading role in a ceremony recognizing 14 Kiwanis “Champions of Change.”

“The Champions of Change program was created to honor ordinary Americans doing extraordinary work in their communities,” DeJulio said.

The 14 honorees, ranging in age from 11 to 85, represented every facet of Kiwanis, including elementary school Kiwanis Kids, high school Key Club members, collegiate Circle K members, and members of Aktion Club. Their service ranges from working to help eliminate maternal and neonatal tetanus to running a crayon recycling project.

The honorees shared their stories with White House officials and Kiwanis members from around the world, and also met legislators at a congressional reception the night before. At the ceremony, DeJulio addressed the Champions and presented commendations to Sen. Richard Lugar of Indiana, who is retiring after decades of service, and to Sen. Bill Nelson of Florida, who served as Key Club International president in 1959-60.

“We all volunteer a lot of time and service in Kiwanis, but we receive a lot of blessings as well,” DeJulio said. 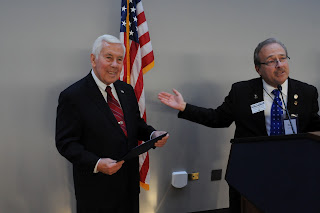 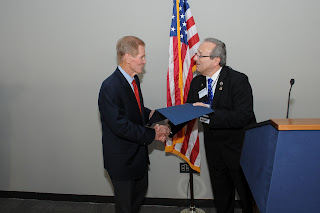