skip to main content
Return to Fordham University
You are at:Home»Inside Fordham»Fordham professor Feels Hopeful for her native Ukraine

** Update: March 11: Olena Nikolayenko, assistant professor of political science, will give a talk on the “Crisis in Ukraine: What’s at Stake?” at Fordham’s Lincoln Center campus, on Wednesday, March 12, at 4 p.m. Details here.

Russian President Vladimir V. Putin broke his silence over the Ukraine crisis on March 4 for the first time since it boiled over into a possible armed confrontation. He said he saw no reason for Russian forces to intervene in eastern Ukraine at the moment but leaving open the possibility of military action, saying that Russia ‘reserves the right to use all means at our disposal to protect’ Russian speakers in the country.” 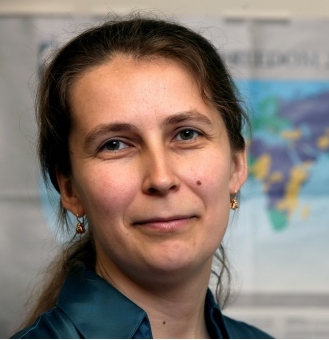 Here in New York, Fordham’s Olena Nikolayenko, assistant professor of political science, is watching developments closely. How could she not? Aside from being a native of the Ukraine, Nikolayenko’s research interests include comparative democratization, social movements, public opinion, and youth, with the regional focus on Eastern Europe and the former Soviet Union. In her book, Citizens in the Making in Post-Soviet States (Routledge 2011), she examined political attitudes of adolescents in Russia and Ukraine. Her current research project focuses on nonviolent youth movements in five post-communist states: Azerbaijan, Belarus, Georgia, Serbia, and Ukraine.

Her research has come to life right before her eyes as thousands of Ukrainians have risen up against the authoritarian incumbent.

“This protest campaign, which resulted in the murder of at least 100 people and injuries of more than one thousand, demonstrated to the rest of the world that Ukrainians want to live in a free and democratic state. To date, struggle for democracy still continues in Ukraine,” she said.

Because of her expertise, Nikolayenko has given several media interviews since the unrest reached the Western media. Watch her discuss developments with CBS National News and Al Jazeera America here. She also gave an interview with the Nigerian-founded, global news network, Arise TV. 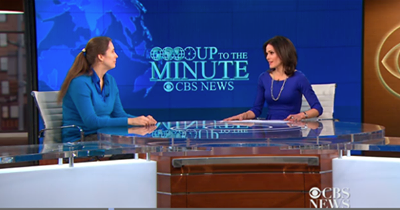 Nikolayenko on CBS Up to the Minute.

On a more personal note, Nikolayenko said she feels a “great deal of pride in Ukrainian citizens who displayed tenacity and courage in standing up against the regime.

“They did not leave the square when temperature dropped below zero and when snipers began to shoot at protesters. Now Ukrainians face the challenge of holding the interim government accountable to prevent the ascendancy of another authoritarian figure in Ukraine,” she said.

Nikolayenko led a group of Fordham students on a trip to the Ukrainian Catholic University in March 2013. She said it’s important for all college students to keep abreast of happenings in the Ukraine and Russia.

“This way, they can make a difference in world politics,” she said. “Millions of people still live in repressive political regimes or suffer from abject poverty, and Western powers as well as ordinary citizens should not turn a blind to what is happening in other parts of the globe.”

We asked her about Putin’s actions.

“[He] may back down from the use of military force to reassert his control over Ukraine, but it does not mean that he is going to abandon the idea of building the so-called Eurasian Union and dragging most former Soviet republics into its sphere of influence,” she said. “Russia is likely to use a wide range of political and economic tools to wield power in the region. In particular, the Kremlin might continue to instigate civic strife in the country and back up a pro-Russian candidate at the presidential elections scheduled for May 25 in another attempt to sabotage Ukraine’s aspirations for integration with the European Union.

We also asked for her take on President Barack Obama’s response to the situation.

“[He] seems to underestimate his opponents in the international arena,” Nikolayenko said. “Since the start of his presidency, Obama tried to cultivate friendly relations with Russia and turned a blind eye to gross human rights violations in the country and Putin’s belligerent foreign policy toward neighboring states. But autocrats respect only the show of power and playing nice with them won’t lead to a fundamental change in the way they do politics.”