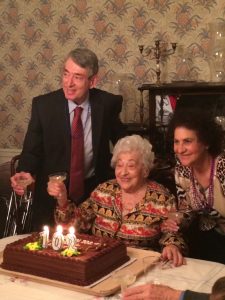 Liselotte Sperber celebrates her 102nd birthday with her son Alan and his wife Betty on January 19th, 2014.

Liselotte Sperber was born in 1912 in Mannheim, Germany and emigrated to the United States with her daughter Aenne in September 1939. Her husband arrived six months later, and they settled in Manhattan.

Aenne (who took the name Ann after her U.S. arrival) achieved success with the publication of her best-selling book about Edward R. Murrow, Murrow: His Life and Times, (Freundlich 1986). The book was a finalist for the Pulitzer Prize in biography. She died in 1994.

In 1999, to honor her late daughter, Liselotte established the Ann M. Sperber Book Award for the best biography or memoir of a journalist. The award is administered by Fordham’s communications and media studies department, with three faculty drawn from the department, and other judges drawn from Fordham, Columbia School of Journalism, Trinity University, John Jay College, America Magazine as well the biographer Patricia Bosworth, and Dr. Alan Sperber, Ann’s brother.

Alan Sperber said that in the course of researching her book on Murrow, his sister got to know Joseph Dembo, a professor in Fordham’s communication and media studies department. Dembo later used it as a textbook in his media studies class.

When the award was created, Fordham University Press subsequently re-issued the Murrow biography with a new introduction by journalist Neil Hickey.

“Mom used to attend the meeting where the winning book was selected. One year there was no book felt to be worthy of the award. Rather than being disappointed that the award would not be given that year, she simply said that if there was not a book that was up to the standards of the selection committee, so be it,” Alan said.

Since the award’s founding, it has honored some of the most important memoirs and biographies of journalists, including biographies of Seymour Hersh, Walter Cronkite, Margaret Fuller, Henry Luce, I.F. Stone, Bill Mauldin, Victor Navasky, Arthur Gelb, James B. Reston, Otis Chandler, William Randolph Hearst, the Ochses and Sulzbergers of The New York Times, and William Lloyd Garrison.

“Mrs. Sperber’s vision and generosity were crucial to the Award’s success. She will continue to inspire us as we go forward,” said Sperber award director Brian Rose, PhD, professor of communication and media studies at Fordham.