Members of the Fordham Kiwanis Club gathered on Tuesday, May 21 at the Rose Hill campus to celebrate the recent announcement that maternal and neonatal tetanus, one of the most deadly diseases a mother and her newborn can face, has been eliminated in more than half of affected countries targeted by UNICEF 13 years ago.

Since 2011, Kiwanis International has been working to raise $110 million for The Eliminate Project to eliminate the centuries-old disease, which kills one baby every nine minutes. The group, which has been serving the needs of children since 1915, has raised $30 million so far.

MNT results when tetanus spores, which are present in soil everywhere, enter the bloodstream. It is mainly caused by a lack of access to sanitary birthing conditions, unclean instruments used to cut the umbilical cord and unclean post-partum cord care. 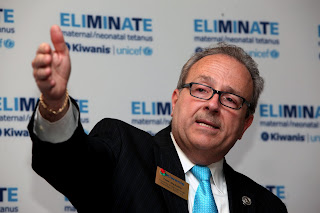 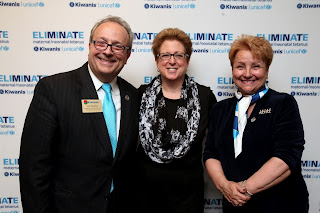 Tom DeJulio, Caryl Stern, president and CEO of UNICEF and Rosemary DeJulio, Assistant To The President at Fordham and member of the Fordham Kiwanis Club Board of Trustees Photo by Bruce Gilbert