skip to main content
Return to Fordham University
You are at:Home»Politics and Society»Fordham Honors Pulitzer Prize-Winning Reporter with Sperber Prize
Photos by Dana Maxson
Seymour Hersh, whose exposé of the My Lai massacre and its cover-up during the Vietnam War earned him a Pulitzer Prize, was honored at Fordham on Nov. 13 with the 2019 Ann M. Sperber Prize.

Ironically, the award was given to Hersh for a book— Reporter: A Memoir (Knopf, 2018)—that he never planned to write.

An investigative journalist who’s penned 10 books about topics as varied as Henry Kissinger, John F. Kennedy Jr., and the Gulf War, Hersh said Reporter was actually the result of his failure to finish what would have been his 11th book. After decades cultivating sources deep within the American military and intelligence community, he signed a contract and got a big advance to write a book about former vice president Dick Cheney. Then his sources got cold feet.

“I began to share some of the stuff I was going to say, and they said, ‘We’re going to go to jail if you do that,’” Hersh said at the award ceremony, held at the Lincoln Center campus. 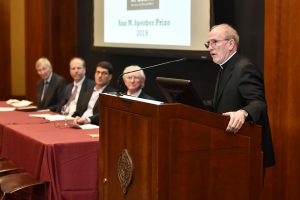 “There is one phrase that I think probably characterizes your life, and it is this: There is no hunger like the hunger of truth,” Father McShane said to Seymour Hersh.

“I’d gotten a huge contract and I’d worked for years on their money, and said, ‘I’m dead.’ [The publisher] said, ‘Well, you can do one of two things. You can go to the gulag and start paying us a dollar a week, or do a memoir.’ So that’s why I did it. Not for mercenary reasons, but to save my life,” he said, laughing.

Joseph M. McShane, S.J., president of Fordham, lauded Hersh, whose work also includes a 2004 bombshell piece about U.S. military abuse at the Abu Ghraib prison in Baghdad, for being someone who educates the public through his life’s work. Father McShane called Reporter “a story of incredible strength, and incredible courage that is told with a very critical but loving eye.”

“There is one phrase that I think probably characterizes your life, and it is this: There is no hunger like the hunger of truth,” he said to Hersh.

“Once you have tasted it, it creates a longing, and you have spent your life really giving into that longing.”

Andrew Meier, chairman of the department of journalism at the New School, said at the ceremony that he read Reporter in one night and it left him mesmerized, stunned, and eternally grateful to Hersh for his work. He called it a landmark of our generation. When he reviewed the book last summer for Book Forum, he dubbed it a “miracle.” 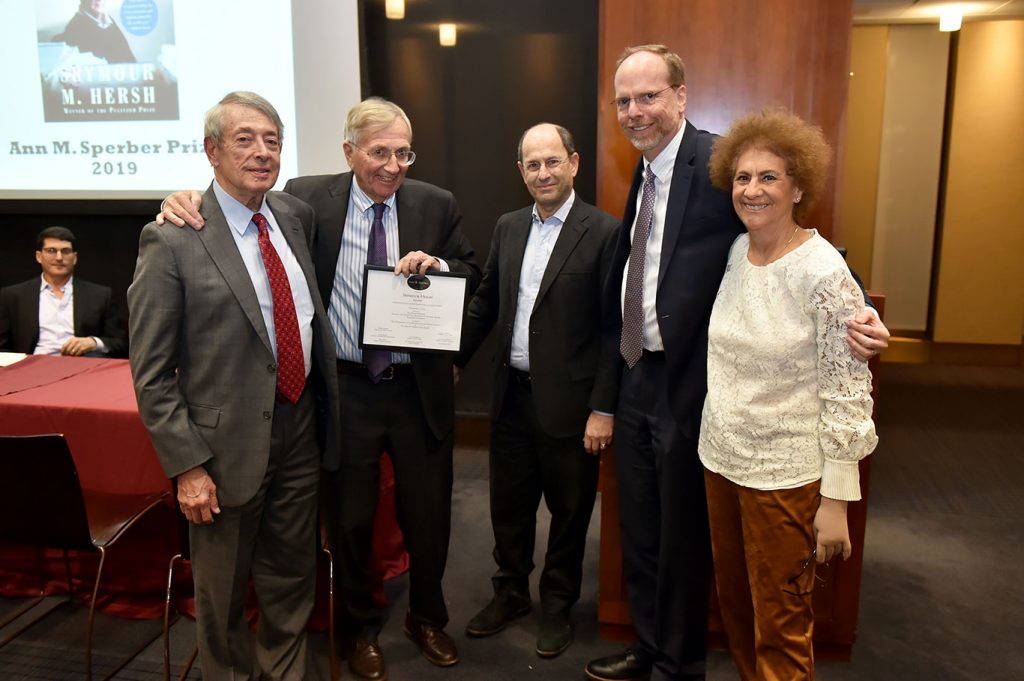 In his acceptance remarks, Hersh also reflected on the lessons he learned as a young reporter covering crime in Chicago. Some were harsh ones about the pervasiveness of racism, even within journalism, such as when he was instructed by an editor to “cheap up” a story about the death of a family when it was revealed they were black.

He also recalled a time when he was instructed to self-censor a story about police misconduct to protect a good relationship with authorities. And in a knock at the current obsession with breaking news first, he also said he learned you could be a better reporter even if you were the second one to write about something.

Perhaps most relevant to today’s current events, he said, is the value of the sources that he’s been able to cultivate over the years. As an example, he singled out Major General Antonio M. Taguba, who sacrificed his career in the military when he leaked a report on Abu Ghraib to Hersh.

“Over the years I’ve learned that the people to find are those people on the inside who believe in being there even now, in this government, who believe the best thing they can do is the best they can. Who are inside, in a sense, and are not afraid to talk about things that go wrong, and take a chance,” he said.

He also had advice for aspiring journalists in the audience.

“If you want to do better in life and reporting, as a journalist, do read before you write,” he said. “Have enough information so you can do a narrative. That means do a lot of work.”

The Sperber Prize was established in 1999 by Liselotte Sperber to honor the memory of her daughter Ann, who wrote the definitive biography of Edward R. Murrow, Murrow: His Life and Times (Freundlich, 1986).

Past winners have included New York Times columnist Charles M. Blow, for his memoir Fire Shut Up in My Bones (Houghton Mifflin Harcourt, 2014), and Robert Miraldi, who won in 2014 for his biography of Hersh, Seymour Hersh: Scoop Artist (University of Nebraska Press, 2013).

The prize is administered by Fordham’s Department of Communication and Media Studies.