skip to main content
Return to Fordham University
You are at:Home»Politics and Society»Five Decades Later, Debate about Racism Still Resonates

Have Americans actually overcome the poisonous racism that led our ancestors to embrace slavery? Can one make a principled argument for limited federal government intervention in race relations that is not a cover for white supremacy?

These knotty questions haven’t been resolved in 2019. But on February 18, 1965, James Baldwin and William F. Buckley Jr. engaged with them in a televised debate that continues to reverberate today. 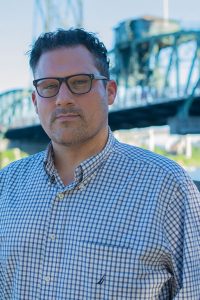 On Monday, Nov. 25, Nicholas Buccola, Ph.D., the author of The Fire Is upon Us: James Baldwin, William F. Buckley Jr., and the Debate over Race in America (Princeton University Press, 2019), will visit Fordham to discuss that debate, which was held in a packed auditorium in Cambridge, England.

Nicholas Tampio, Ph.D., professor of political science, said the topic of the 1965 debate, “The American Dream is at the Expense of the American Negro,” spoke to issues that are still with us today.

“James Baldwin thought racism pervades every aspect of American life, and you need to actively study it and understand why. You can’t just imagine this as a fair starting point for African Americans to participate in the American dream.”

Tampio noted that one of the most famous lines that Baldwin uttered during the debate,

“I picked the cotton, and I carried it to market, and I built the railroads, under someone else’s whip, for nothing. For nothing,” was a precursor for articles such as Ta-Nehisi Coates’ 2014 The Case for Reparations. 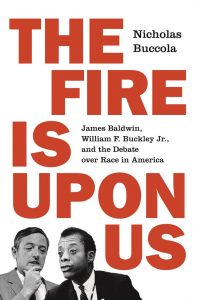 At the time, Buckley was using the National Review, which he’d started 10 years earlier, to lay out the case for what he considered a thoughtful, intellectual conservative movement. In his book, Buccola, a professor of political science at Linfield College, explores the deeper philosophical issues that underpinned Buckley’s arguments, Tampio said. The challenge Buckley set forth for himself was taking positions that inherently protected white nationalism, such as states rights, while also disavowing the explicit racism of the Klu Klux Klan.

“Part of what Buckley was really trying to argue was, there are principled cases for letting people desegregate, or address racial injustice in due course. Buckley was nervous about government reparations programs, and big government trying to solve the problem of racism,” Tampio said.

“Baldwin was saying ‘No, we’ve got to do a lot more than this.’ He wasn’t interested in public policy himself, but there was this sense that the government needed to do something. Part of what makes the debate so interesting is, they both have good points.”

Tampio said he hopes that bringing Buccola to campus will spur the Fordham community to look inward.

“What Buccola’s book does is it gives us a chance to think from a new angle about this problem we’re still dealing with. How much do we let things just take their course to address racism, and how much do we need conscious accounting, moral reformation, and public policy to change minds and hearts?”

Nicholas Buccola’s visit is sponsored by Fordham’s Department of Political Science and the Delta Zeta chapter of Pi Sigma Alpha. It will take place Monday, Nov. 25, from 4 to 6 p.m. at Faculty Memorial Hall, Room 320.