skip to main content
Return to Fordham University
You are at:Home»Inside Fordham»FCLC Student Meets Commander in Chief (With Bo in Tow) 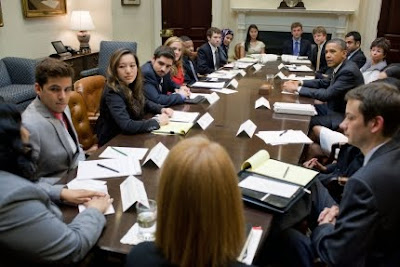 Fordham College at Lincoln Center rising senior Ryan O’Toole got an unexpected surprise on June 6 when President Barack Obama dropped in to the 100 Youth Roundtables event O’Toole was attending at the White House.

O’Toole (above at far end of table in blue shirt) was one of ten young leaders from around the nation invited to a discussion session with the President’s senior advisor Valerie Jarrett and others in the White House’s Roosevelt Room. As part of the youth initiative de-briefing, the were asked to share their views on youth entrepreneurship, the environment, poverty, the job market, student loans and other topics of interest to the nation’s future leaders.

Suddenly President Obama showed up in an unscheduled appearance at the session (with his dog Bo), meeting the student attendees and engaging in a chat about education, Don’t Ask/Don’t Tell, the Social Work and Reinvestment Act and the need to be involved to inspire change.

“It was an incredible meeting,” said O’Toole. “He shook hands with us and I was sure to mention Fordham to him. It was a great discussion and a chance for us to share our opinions and make our voices heard.”

As president of FCLC’s United Student Government, O’Toole said he had initially organized a roundtable on campus last semester to draft a report for the White House after he heard its Office of Public Engagement wanted input on issues students felt were important.

“As students at a Jesuit university, we are actively engaged in our community,” he said. “I immediately felt that Fordham should get involved.”

He sent in the report and received an invitation from the Office of Public Engagement to join the West Wing roundtable with nine other youth leaders from around the nation.
“I [was]proud to be able to represent Fordham at the White House,” he said.