skip to main content
Return to Fordham University
You are at:Home»Politics and Society»Extreme Polarization and Fear of ‘the Other Side’ Poisons Political Discourse, Panelists Say
Photos by Bruce Gilbert
The good news is Americans dislike political polarization. The bad news is, everyone thinks the other side of the aisle needs to do something to fix it, and the one remedy—listening to each other—is getting harder and harder.

Such was the lesson at “Political Discourse in a Polarized Age,” a panel discussion that took place Thursday, Oct. 7, at the Lincoln Center campus. The gathering, which was the first of eight that Fordham will hold this year, featured television journalist George Stephanopoulos; pollster and author Kristen Soltis Anderson; Robert Talisse, Ph.D., professor of philosophy at Vanderbilt University; and Roshni Nedungadi, a partner at HIT Strategies.

“As we shift into our more extreme selves with our allies, our views about our partisan opponents also shift. We come to see them as incomprehensible, irrational, untrustworthy, dangerous, unpatriotic, lazy, benighted, ill, and in need of diagnosis rather than argument,” he said.

We also adopt more demanding standards for authentic membership in our group and expel members for reasons of impurity. Representative Liz Cheney, who was ousted from her leadership role in the Republican Party in May, is a perfect example of this, he said. 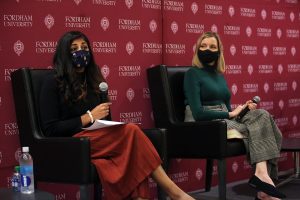 Stephanopoulos agreed that there is more emphasis on politicians catering exclusively to the most extreme elements of their base.

‘It used to be a common technique to point out to a politician or policymaker, ‘Here’s what you said six months ago,’ or ‘What you just said is not true,” he said.

“They don’t care anymore. It doesn’t matter at all. They don’t feel the need to respond in a way that addresses the other side; they just go ahead and play to their own. “

Anderson said the research shows that on policy issues, there is more agreement among liberal voters and conservative ones than one might expect.

The problem is the deep fear each side has for each other.

“Both sides fundamentally misunderstand the other side’s capabilities and intentions,” she said, noting that Republicans and Democrats both believe the other is bent on making the country a worse place. Equally importantly, both believe the other has the ability to make it happen, be it through Republicans’ control of their state governments and the Supreme Court, or Democrats’ control of Congress and the Presidency, as well as alliances in the entertainment and media industry.

“If you believe the other side has bad intentions and a ton of power to make good on them, you suddenly begin to justify an “ends justifies the means” attitude,” she said.

Nedungadi focused on research on 18- to 40-year-olds, which shows they have not embraced partisanship as much as their elders. Only 8% of millennials considered themselves strong Republicans, and only 16% are strong Democrats. 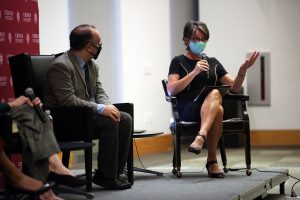 They may seem polarized because they are involved in protest and activism, she said, but that’s because they’re poorly represented in Congress—millennials make up about 6% of Congress, but millennials and Generation Z are 37% of the electorate. Baby boomers make up 28% of the eligible voting population but represent 56% of Congress.

She agreed with Anderson that 18- to 40-year olds do not form an identity around specific policies.

“We ran a focus group with young folks earlier this week asking about Joe Biden’s “Build Back Better” agenda, and none of them could point to any provisions within that bill could help them,” she said.

“They just knew either they were for or against it, based on whatever politician they were following at the time.”

Stephanopoulos was skeptical that the “feedback loops” that are generated by politicians and the media can be overcome.

“Even though I completely agree with advocating the need for listening, right now we can’t even come to an agreement on a common set of facts around which to have a conversation,” he said.

He noted that a recent survey found that 61% of white Republicans believe that the last presidential election was stolen. That included 35 percent with college degrees.

“That’s a stunning number for something that is completely untrue. Are these people who are incapable of telling fact from fiction? I don’t think so, but it’s what they’re being told every single day, and it’s being reinforced by the political and the media culture. I don’t know how to break that,” he said.

A common lament was that there are few places left for Americans of different ideological stripes to get to know one another. Stephanopoulos noted that schools and churches do not bring people together, as Americans now live in more ideologically homogenous towns.

Media is incentivized to divide as well, he said, and although the partisan tilts of cable networks are well known, social networks are part of the problem as well. Whether it’s Facebook or Tik Tok, panelists agreed that users are more likely to receive tailored news that’s been created just to reinforce their opinions.

Talisse bemoaned the way the phrase “do the research” has taken root on social media in response to things like the COVID vaccine, and is indicative of a vicious, closed feedback loop.

“What does that word “research” mean on social media? It means that you’ve scrolled through enough Google results or through your timeline, to find enough people to affirm the thing you are already inclined to believe so that now you feel justified in escalating your confidence in that thing,” he said. 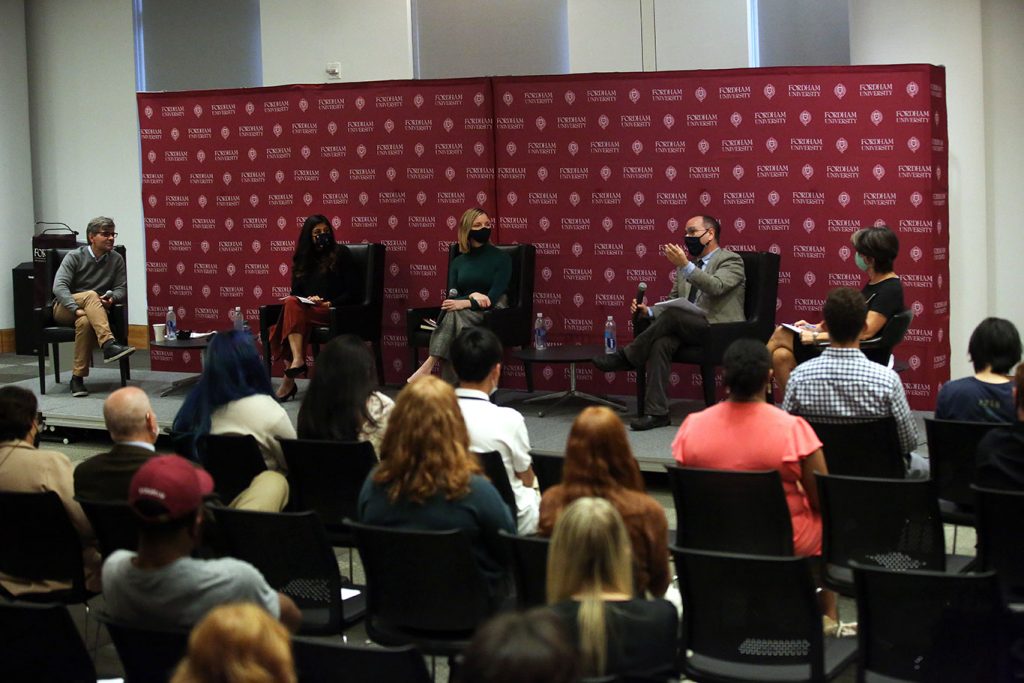 Guests for the panel were allowed to remove their masks provided they were vaccinated and had received a negative COVID 19 test within 24 hours of the event.