skip to main content
Return to Fordham University
You are at:Home»Inside Fordham»Expert Lays Out Governing Challenges Facing India and China

One out of every three people on the planet lives in India or China. 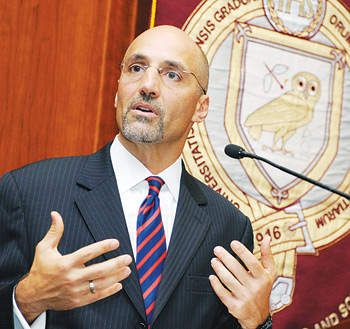 William J. Antholis, Ph.D., managing director of
The Brookings Institution, said that local politics in India and China should be given serious attention.
Photo by Chris Taggart

And the way they govern themselves has major implications for the rest of the planet, a scholar told an audience at Fordham on Sept. 13.

“Establishing and maintaining unified political systems across a continent and across multiple belief systems requires a tricky, if not dark magic. [In the United States] our leaders often fail to pull the rabbit out of the hat, and our whole becomes less than the sum of its parts,” said William J. Antholis, Ph.D., delivering the fall Gannon Lecture, “Fractious Federations: Why China’s Provinces and India’s States Matter.”

“Only occasionally do we reach a consensus. More often than not, we resort to forging compromises.”

Antholis, the managing director of The Brookings Institution, used his talk to provide a glimpse of the kinds of people who run India’s states and China’s provinces, what they believe and value, and how they view global issues.

Just as California and Alabama have different priorities from each other and from the federal government, so too is there a tug of war between local and national authorities in India and China.

“Neither country has a fully federal system that gives “sovereign” powers to constituent units,” he said. “More than America or Europe, China and India give their central governments final authority over local officials.

But in neither country is the central government completely in charge, Antholis added.

If we want to tackle issues such as global climate change, poverty, and nuclear proliferation, it’s important to pay attention to the differences between Guangdong and Chongqing in China and Gujarat and Bihar in India, he said.

As a democracy, India is very different from China, Antholis said. But like China it lacks a key ingredient that has helped bind Americans to a common cause: pluralism.

The Indian states of Gujarat and Bihar, for example, have made major strides in the last years. But while Bihar’s chief minister Nitish Kumar has been praised for a “growth with justice” agenda, Narendra Modi, the Hindu chief minister of Gujarat, has been denied a visa to visit the United States because of his concerns that he has not sufficiently protected religious minorities.

Local politics in China, India, the United States, and Europe are a serious global matter.

“The capitals of these four continental unions must reassess how to manage their diverse states and provinces. Union systems learn slowly how to forge compromise and consensus,” Antholis said.

“By observing and cooperating with one another, there may be opportunities to learn how to do this more effectively. The foundation for that, in turn, may be learning to respect the fractiousness that is at the heart of federalism itself.”

The event was sponsored by the Graduate School of Arts and Sciences and the Orthodox Christian Studies Center.