skip to main content
Return to Fordham University
You are at:Home»Inside Fordham»Event Puts Focus on Restoring Young Offenders to Society 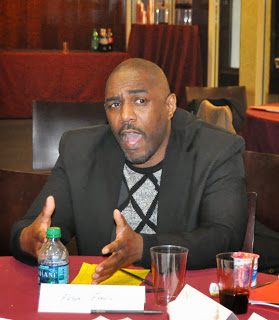 At an event at the Lincoln Center campus, two men spoke with hard-won clarity about the early experiences that put them on the path to incarceration. The Rev. Divine Pryor, Ph.D., recalled that he struggled in class because he went to school hungry, but found himself labeled as having a learning disorder. Deon Richards was bullied as a child and later found the experience had wrought a frightening change in himself.

“I never thought I would actually become a bully from getting bullied,” he said.

The men were part of the Consultation on Restorative Justice and Youth Incarceration, convened on Nov. 18 to generate ideas for helping young offenders reclaim their lives and stay out of prison. The event was attended by judges, educators, university leaders, and representatives of churches, nonprofits and youth service agencies.

It was organized by a committee that included Cheryl Bader, clinical associate professor at Fordham Law School, and Anita Lightburn, Ed.D, director of the Beck Institutefor Religion and Poverty and a professor at Fordham’s Graduate School of Social Service.

One speaker—Robert McCrie, Ph.D., professor at the John Jay College of Criminal Justice—noted that incarceration rates in the United States have soared since 1973. “Why has that happened? Are Americans seven to 10 times more criminal than other countries?” he said. “No. It’s because of laws, and the laws within their hearts have come from Washington and then (been) replicated by the states.”

Peggy Shriver, co-director of the event and former assistant general secretary for research with the National Council of Churches, called for “better ways to lead our young people into healthier, more constructive lives, even after having done something destructive or harmful to themselves or to other people.

“If we bring together our individual insights, perhaps new mosaics of possibility will emerge.”

Pryor recalled growing up in a large family, saying there wasn’t always enough food for everyone. “It was difficult for you to pay attention in class if you were battling with your stomach,” he said. He was labeled early as disruptive, and a possible candidate for special education, he said, but added that he was a capable student who would have done better if given the right stimulation.

“When you’re not being properly stimulated, you do other things,” he said. After repeated detentions, and then expulsion, he said, “the streets welcomed me with open arms.”

He pursued an education in prison, and saw an extremely low recidivism rate among his cohort of fellow students. “If you really want to talk about what works, I can tell you, education works,” said Pryor, who is executive director of the Center for New Leadership on Urban Solutions, a think tank in Brooklyn, N.Y.

Alongside the bullying that left its mark on him, Deon Richards, a resident of the South Bronx, noted the lack of contact with his parents growing up. “I just started doing crazy things that I didn’t envision myself doing at that age,” he said. By age 14, he had been arrested eight times “because of things that I was trying to blame on my parents and blame on the streets.”

After realizing he had to either “change or die,” he said, he turned his life around with help from the Center for Community Alternatives, based in New York City and Syracuse, N.Y. Through CCA he developed his passion for music, and also worked with youths facing troubles similar to those that he faced.

“I had an opportunity to actually help the young people like myself (who were) going through the same exact things,” he said.

Said Pryor: “Public safety is not exclusively a law enforcement endeavor. It’s about community cohesion and cooperation and respect, and how we look out for each other.”