skip to main content
Return to Fordham University
You are at:Home»Politics and Society»Education as Important as Food and Shelter, Says Humanitarian Studies Student
Slattery in Morocco, which she visited as part of her studies at Universidad de Deusto in Bilbao, Spain. Contributed photo
One raffle drawing changed the trajectory of Samantha Slattery’s life forever.

During her senior year in high school, Slattery, FCRH ’15, attended a Model United Nations conference in Hershey, Pennsylvania, that featured a keynote speaker from Honduras. When he announced he’d be giving away a free trip to the Central American nation, Slattery, who had been planning to enlist with U.S. Navy after graduation, was shocked to hear that out of 3,000 names in the audience, hers was the one that was chosen.

“My parents were initially very excited, not so much when they found out it was the then-murder capital of the world,” she said.

“After being exposed to extreme poverty there for the first time, it just changed my path in life.”

That service trip, to work with the group Students Helping Honduras, only lasted a week, but it inspired Slattery to pursue a career in humanitarian aid. After graduating from Fordham College at Rose Hill with a degree in political science, she moved to Indonesia to teach English on a Fulbright scholarship, and then returned to Honduras in 2016 to work as a program director for Students Helping Honduras.

That experience brought her back to Fordham, where she’ll be earning an M.S. in humanitarian studies in May.

“I came back and said ‘I really wanted to put my feet into this work further and work in humanitarian response,’” she said. 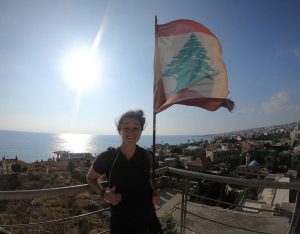 Slattery visited Lebanon this past summer as part of an internship.

Education is key to the work that Slattery did in Honduras, and it’s going to be the focus of her master’s thesis. She conducted needs assessments as a member of a Honduran-led team in the northern section of the country.

While it’s well understood that children can suffer severe development issues when their education is denied or delayed, what Slattery has found is that when it comes to children, safe environments and education can mutually reinforce each other. And, conversely, missing out on an education can be nearly as damaging—for the child and the community—as the disaster that disrupted it.

“Once a child falls out of the system, they may not feel empowered to participate in community programs or civil society. It proves costly for everyone, because the thinking, learning, and psychosocial skills that children develop in school contribute to post-war reconstruction,” she said.

“Education should be considered a pillar of the humanitarian response. We give lifesaving things the most priority, like food, water, and shelter, but we’re finding that education is just as important.”

The border between Morocco and Melilla, Spain, that Slattery visited in April.

“In Deusto, they focus on a specialization of protection. People are often viewed as objects in need of protection, but they have their own resiliency to protect themselves. These classes really focused on mainstreaming protection programming into all aspects of humanitarian programming,” she said.

What was particularly enlightening about her time in Spain, she said, was the way she was able to observe the externalization of the European Union’s border. In April, she flew to Morocco and visited Melilla, a five-square mile autonomous Spanish city of 78,000 residents located on the tip of the country’s northern coast. The city is separated from the rest of the African continent by a set of 20-foot-high fences topped with razor wire. As part of their visit, Slattery’s class met with a nonprofit organization that helps immigrants that successfully make it over the border apply for asylum.

“I’ve traveled to probably 40 countries, and it was probably one of the most intense borders I’ve ever seen,” she said.

In addition to academic work, Slattery has in the last year earned certificates in areas such as hazardous materials, bleeding control, and tactical emergency casualty care. Her travels in Honduras often brought her to remote areas where medical care was in short supply, so she said she felt the need to get basic training for herself to prepare her future work.

Looking back, she said that what moved her the most when she first visited Honduras was a stop at a village that had been devastated by Hurricane Mitch in 1998. In 2010, she said, many residents still hadn’t returned home and had little access to clean water, electricity, or education.

“This forgotten, protracted displacement really stuck with me, and it just made me realize that we have a shared responsibility to bear witness, stand in solidarity, and preserve the human dignity of those affected by violent conflicts or climate disasters,” she said.