skip to main content
Return to Fordham University
You are at:Home»Inside Fordham»Does History Matter When Interpreting the Law?

The past several years have seen unions under pressure from Wisconsin’s state capitol to Philadelphia’s city hall. The whittling away of collective bargaining rights, whether in the public or private sector, is a subject of intense interest to James J. Brudney, professor of law.

“In law school, I took a course in labor law and was drawn to the human and social justice aspects: real people experiencing real economic challenges,” said Brudney.

Brudney doesn’t downplay the fact that many governments need to pay forward substantial amounts of money toward employee pensions. But he finds recent rhetoric used by public officials, and some in the press, to be inflammatory, though not without historic precedent.

He has written about how both employers and reporters from the 1930s through the 1970s chose terms like “union boss” and “big labor” to frame the story as a “gladiatorial battle between business and labor, rather than devote attention to the underlying policy issues.” 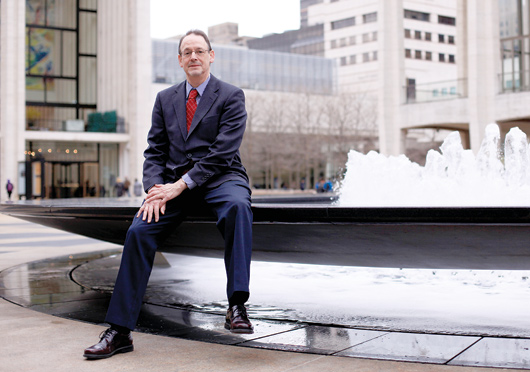 After growing up at 86th Street and Amsterdam Avenue, a short subway ride from where he now teaches, Brudney went on to study at Amherst, Oxford, and, eventually, Yale Law School. In Washington, D.C., he clerked for Supreme Court Justice Harry Blackmun. He then entered private law practice, representing unions and employees, before returning to the federal government as chief counsel and staff director for the Senate Subcommittee on Labor.

As a scholar, Brudney’s primary focus has been on law and the workplace, but his interest in legal language and historical context embraces a wider perspective.

“While the words of the enacted text are the most authoritative source of meaning, you also have to examine context,” said Brudney. “In particular, it is a mistake to ignore reliable evidence of what Congress had in mind when enacting those words.”

Brudney recently co-authored an article with Laurence Baum, Ph.D., professor emeritus of political science at Ohio State University. “Oasis or Mirage: The Supreme Court’s Thirst for Dictionaries in the Rehnquist and Roberts Eras,” was featured in a column in The Washington Post; the article will appear in the fall in the William & Mary Law Review.

Brudney and Baum take an unflinching look at the court’s increasing reliance on dictionaries, a reliance that has enabled the justices to distance, if not divorce, laws from their historic context as part of what the authors refer to the “rise of textualism.”

The article contends, based on empirical and doctrinal analysis, that the current justices tend to use dictionaries as “ornaments” that “add a certain authoritative gloss” at the start of a court opinion while contributing “only marginal substantive value” to its overall reasoning. Less often, but more disturbingly, the court’s use of dictionary definitions erects “barriers” that preclude inquiry into or reliance on more traditional contextual resources like legislative purpose, policy consequences, or respect for agency judgments.

When asked how such literalism affects labor and employment law, Brudney cited a 2001 Supreme Court case, Circuit City vs. Adams, that he analyzed in 2005 in a coauthored article for the Vanderbilt Law Review. The article uses the Circuit City case as a clear example of how taking something out of context can undermine the original intent of lawmakers.

The consumer electronics giant required job applicants to agree to arbitration of all future job-related disputes—waiving their right to bring lawsuits under multiple federal laws—as a condition of employment. Adams, a Circuit City salesman, signed the agreement but later filed an employment discrimination lawsuit. Circuit City then sought to compel arbitration based on the 1925 Federal Arbitration Act (FAA).

Circuit City lawyers argued that Adams was covered under the FAA, although the Act included language exempting “contracts of employment of seamen, railroad employees, or any other class of workers engaged in foreign or interstate commerce.” Writing for a bare majority of five justices, Justice Kennedy relied on a literal-meaning analysis of the exemption to conclude that it covered only transportation workers, not service industry employees like Adams. Crucially, said Brudney, “the court majority found the text-at-issue to be so unambiguous that it refused to consider the legislative history of this FAA provision.”

But this legislative history was highly instructive. The bill that became the FAA had been introduced in response to judicial refusals to enforce commercial arbitration agreements. Although the bill’s supporters did not anticipate that it would extend to employment contracts at all, organized labor voiced strong concern that the bill language might be interpreted to cover such contracts. In response, the bill’s authors willingly added language exempting employment contracts and labor withdrew its opposition. In Brudney’s view, “By ignoring legislative history, the majority accomplished the exact opposite of what the enacting Congress intended.”

Brudney’s scholarship is part of a national debate between proponents of textual literalism and advocates for a more purposive approach to statutory meaning. The debate has highlighted that understanding how to apply statutes and regulations remains an underserved area in the curriculum of most American law schools. Since arriving at Fordham in 2011, Brudney has helped to initiate a new required course that addresses laws and regulations in their historical and institutional contexts. The first-year course includes an emphasis on how statutes are the product of a legislative process—a process that Brudney believes should not be ignored when interpreting the law.

“Our students are developing skills enabling them to reason in sophisticated ways about statutes,” he said. “And contextualization is necessary if they are to learn how to construe and apply statutes in ways that will make them effective as lawyers and policymakers.”