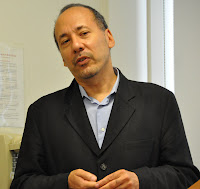 When the real estate market was booming, the dreaded “G” word caused anxiety in East Harlem, a journalist who documented the tension told Fordham students on Sept. 29.

Ed Morales, a journalist who has covered New York City for more than 20 years, discussed gentrification and whether has displaced the Puerto Ricans who once populated East Harlem in droves.

“We all know about gentrification,” said Morales, whose parents met and married in East Harlem, also called Spanish Harlem and El Barrio. “It’s been a problem for as long back as I can remember.”

Morales was a guest speaker at a class on “Hispanics in the USA” at Fordham College at Lincoln Center. Clara Rodriguez, Ph.D., professor of sociology, said she invited Morales because a documentary he co-produced, Whose Barrio?, fit in line with the topic students were researching in her class.

“[The documentary] focused on the economic shifts that occurred in these neighborhoods and their cultural impact, as opposed to the way in which it is more generally perceived—as racial or ethnic shifts,” Rodriguez said.

Morales showed excerpts from Whose Barrio?, which explores gentrification in East Harlem, where the median household income is just over $22,000.

“Downtown is moving uptown,” Morales says in the film. “Big changes are coming—what some people call development and others call gentrification.”

Shown at the HBO New York International Latino Film Festival in 2009, Whose Barrio? was co-produced with fellow journalist Laura Rivera. The film follows two East Harlem residents—Jose Rivera, a middle-aged man of Puerto Rican descent who was born and raised in El Barrio, and James Garcia, a 20-something seventh generation Mexican-American that bought a condo in one of the new buildings in the area.

While Garcia advocates for an upswing in the neighborhood’s “quality of life,” Rivera worries wealthier newcomers are forcing him out. “You can’t live here and expect to buy a home unless you’re making outrageous amounts of money,” Rivera said in the film. “’Luxury’ means I can’t afford it.”

At one point in the film, Garcia rails against residents, who he says are afraid of change and perhaps comfortable living among crime. Morales said this isn’t so.

“Community leaders have always asked for more policing,” Morales said. “Unfortunately, it seems to come only after the neighborhood is gentrified.”

Before the neighborhood became “hot” for gentrification, Morales said his own friends of Puerto Rican descent who were coming out of academia and other professions moved to El Barrio in an attempt to keep “a cultural presence.”

“They were rather idealistic,” he said. “Their goal was the save and buy in the area, which I thought was great. But then the skyrocketing real estate market happened and no matter how much they saved, they could never save enough.”

Morales said gentrification, while slowed somewhat, is still going on in Spanish Harlem. Most of the new buildings that were not able to sell units are now renting at rates of $1800 and above.

“In New York, the housing market has not gone down as other parts of the country have,” Morales said referring to rent prices that many in the area could never afford.

Whose Barrio? was not intended solely for the people of East Harlem, Morales said.

“It’s a universal film. People in many parts of the country, in one way or another, have been affected by the forces of the real estate market and have had to move out or have been priced out,” Morales said.

For more information about the film, visit www.whosebarrio.com.

A Latin music Newsday columnist and longtime Village Voice contributing writer, Morales’ work has appeared in Rolling Stone and The New York Times. He is the author of Living in Spanglish (St. Martin’s Press, 2003) and The Latin Beat: From Rumba to Rock (DaCapo Press, 2003).