skip to main content
Return to Fordham University
You are at:Home»Inside Fordham»Director of Fordham’s Ubuntu Program Reflects on Mandela’s Legacy 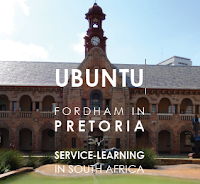 On Dec. 5, the world lost Nelson Mandela, who dedicated his life to human rights around the globe and civil rights in his native South Africa, and who changed the course of history through his actions.  Economics professor Booi Themeli, Ph.D., director of Fordham’s Ubuntu Program at the University of Pretoria, is one of the many people whose lives were changed by Mandela’s lifelong fight for equality. Themeli grew up in South Africa under apartheid, and next month, he will lead a group of Fordham students to his country to participate in the Ubuntu service-learning program and “follow in the footsteps of Mandela.”

Q. How great was Mandela’s influence on you growing up in South Africa?

For me, his loss been rough, personally. I went to school with one of his granddaughters, and we’ve stayed friends for years. I grew up in South Africa in the Limpopo province during the days of apartheid and I lived through the country’s turmoil, during the height of apartheid in the 1980s, after Mandela’s release from prison. And my two sisters lived through the better part of what was going on earlier. For us, he was inspirational. He showed us that everything was possible in life. And he paved the way for many South Africans like myself to go and study overseas.
Q. How did his struggle pave the way for education equality?

When I was in high school, things were segregated. The apartheid system meant there were schools meant for white kids only, for Indian kids only, for black only, and schools for mixed race groups. I could not go to any university so I went to a black university, the University of Limpopo, because of the segregation.

Thanks to Mandela, the world was protesting against apartheid, and USAID (U.S. Agency for International Development) started special scholarships for black South Africans to go overseas, especially to come to this country. I came through that channel. Had it not been through Mandela’s high profile, the world would not have known the horrors of apartheid and how it had denied a lot of blacks access to education.

Q. How will you share the Mandela legacy with your students?

In January, the program is going to South Africa for a semester abroad. We will be taking 20 students–18 from Fordham, one from University of San Francisco, and one from University of Scranton. These kids are expected to do service learning in the poor areas of South Africa, like Soweto, where Mandela grew up.  It is a special time that they are going, because the nation will be going through a period of mourning. More so, it is an opportunity for them to follow in the footsteps of Mandela, to go out there and touch the lives of so many South Africans that need help. So, for this trip especially, service will have a much deeper meaning, as the students uphold his legacy in making a difference in the lives of others.

Mandela said “What comes in life is not the mere fact that we have lived. It is what difference we have made to the lives of others that will determine the significance of the life we lead.”