skip to main content
Return to Fordham University
You are at:Home»Politics and Society»Democracy Now! Host Speaks at Annual Humanitarian Design Conference
Photos by Bruce Gilbert
On June 19, the United Nations reported that as of the end of last year, nearly 71 million people had been forcibly displaced by war, persecution, and other violence worldwide—an increase of 2% over the year before, and 65% higher than a decade ago.

Two days later, humanitarian aid workers, designers, and architects from around the world gathered at Fordham’s Lincoln Center campus to talk about what can be done to help them.

Design for Humanity Summit II: Design in the Time of Displacement, a day-long summit sponsored by Fordham’s Institute of International Humanitarian Affairs, is the second design summit of its kind, following an inaugural gathering last June. The conference explored how the intersection between design and humanitarian action can compel a more dignified, inclusive, and sustainable humanitarian response. 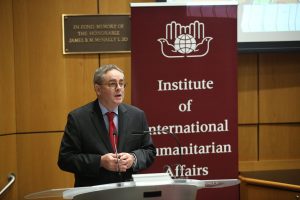 “We are committed to creating a community of practitioners and scholars passionate about developing a charter for humanitarian design,” IIHA executive director Brendan Cahill, said in his opening remarks.

In a keynote address, Amy Goodman, host and executive producer of Democracy Now!, told attendees that the media can be the greatest force for peace on earth. It has the capacity to spotlight people affected by wars and climate change-driven weather events, she said, citing the work of activists such as those who protested the installation of an oil pipeline at Standing Rock, North Dakota.

“The way the media talks about pro-democracy movements is, it’s for other countries, because we’ve achieved democracy in the United States,” she said.

“But you never really achieve democracy. You have to fight for it every single day, and that’s what these human rights groups do. That’s why it’s critical we have a media that provides a platform for people like all of you, who are the experts in your areas, rather than pundits we get on all of the networks, who know so little about so much.”

Democracy Now! has covered many stories related to refugees recently, she said, including one about a lawyer representing the Department of Justice who argued before Ninth Circuit Court of Appeals in San Francisco that the administration was not required to provide detained children with soap, toothbrushes, and blankets. Less known, she said, are stories such as that of Jeanette Vizguerra, a mother of four from Mexico who has lived in the U.S. for 20 years but has been recently living in a church in Denver to avoid deportation. 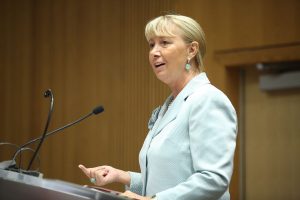 “To be able to hear their voices, that’s what will change the world. To go to where the silence is. Working with refugees around the world, it’s not often silent where you are, but for the corporate media, it is. Those voices do not hit the media radar screen. And it’s our job to elevate them,” she said.

“These are the voices that will save all our humanity.”

In addition to workshops, Friday’s summit, a partnership between the IIHA and the International Organization for Migration, also featured talks by Argentina Szabados, regional director, IOM in South-Eastern Europe, Eastern Europe, and Central Asia, and Richard Blewitt, head of delegation and permanent observer of the Delegation of the International Federation of Red Cross and Red Crescent Societies to the United Nations.

Szabados said there is cause for both optimism and pessimism in the field. On the plus side, the tools for collecting and analyzing data collection have never been more easily obtained. On the other hand, she noted, no one believes anymore there is anything temporary about settlements for displaced individuals. One camp on the India/Bangladesh border, she noted, has been open for 70 years. Therefore, it is important to consider what it means for such places to be not just shelters, but “homes.”

“The dwelling places we provide ought not be ‘just good enough’ to keep people alive in a miserable twilight of half-existence. They must also give people an opportunity to develop, to be healthy, to learn,” she said. 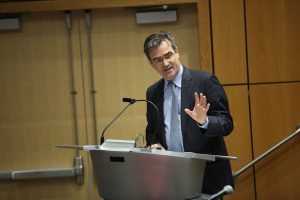 Richard Blewitt, head of delegation and permanent observer of the Delegation of the International Federation of Red Cross and Red Crescent Societies to the United Nations

Blewitt said one of the lessons that has become abundantly clear when it comes to providing shelter to vulnerable populations is that aid groups should be focused on the process that leads to shelter construction, not just the finished product.  People who have been displaced should be offered a chance to help rebuild their own community.

“When we’re looking at shelter, non-specialists often think we should build something by ourselves. And this is understandable, but it might hamper a future resilience agenda,” he said.

“We want to work very much with populations that are affected, and enable them to look at incremental expansion and improvement of their shelter options, and [let them know]that they are in the driving seat, not us.”

This has the effect of bringing down costs, he said, and also allows countries to take pride in being able to care for its citizens, even if what’s built is not perfect.

“Sometimes humanitarians kind of believe they’re fixing everything, but actually that’s not the reality, he said, noting that globally, the amount of money sent to countries via remittances dwarfs official development aid. 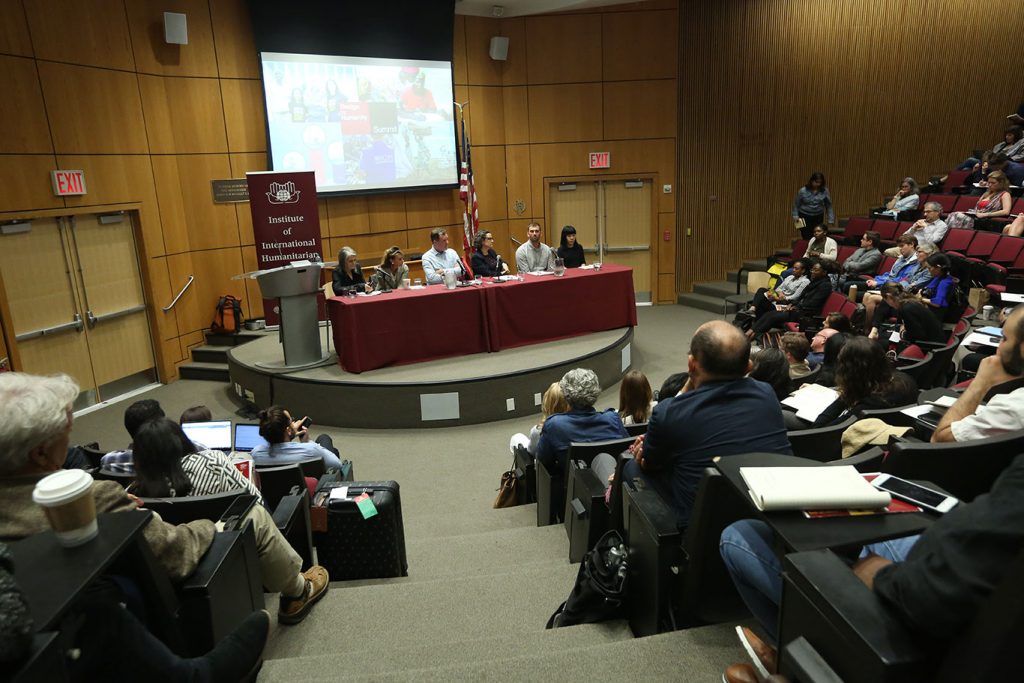 Goodman moderated a panel discussion after her talk titled “How Data-Driven Storytelling Can Promote Human Rights and Amplify Voice of People on the Move.”