skip to main content
Return to Fordham University
You are at:Home»Politics and Society»Dangers of Conscience-Based Objections Dominate Ethics Panel
Nancy Berlinger and Linda Greenhouse at the McNally Amphitheatre
Too many people in the United States are refusing to participate in controversial but crucial aspects of civil society because of their religious beliefs, and the U.S. government needs to stop enabling them.

That was the message of “Conscience Matters: Tensions between Religious Rights and Civil Rights,” a panel discussion hosted on April 19 by Fordham’s Center for Ethics Education.

The panel, which was held at the Lincoln Center campus, featured Linda Greenhouse, the Joseph Goldstein Lecturer in Law and Knight Distinguished Journalist-in-Residence at Yale Law School, and Nancy Berlinger, Ph.D., a research scholar at the Hastings Center, a bioethics research institute.

Greenhouse and Berlinger tackled the thorny issue of conscience-based refusals from the perspective of the law and the medical establishment, respectfully. Greenhouse, who covered the Supreme Court for The New York Times for three decades, spoke at length about one case that the high court ruled on in 2014, Burwell v. Hobby Lobby, and another, Masterpiece Cakeshop v. Colorado Civil Rights Commission, which was argued in December and is still pending.

A Threat to Civic Society 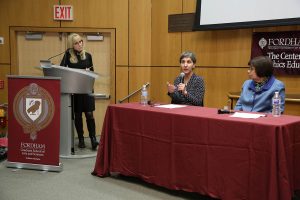 Greenhouse was unsparing in her criticism of the courts’ willingness to grant exceptions based on “deeply held religious beliefs,” saying they undermine civic society and are granted with little consideration for the adverse effects they may have on others.

Sometimes the court grants exceptions even when it’s not clear that a person’s rationale is based on sound theology, she said. In the 2015 case Holt v. Hobbs, for instance, the court ruled unanimously that a prison’s rules against beards violated the rights of a prisoner who said it comported with his Muslim faith. Greenhouse noted that nowhere in the Quran does it explicitly stipulate men maintain facial hair.

The Hobby Lobby case, in which the court ruled in favor of a private business that defied a government rule that employers must provide birth control under the health plans they offer, is even more egregious, she said. The Hobby Lobby CEO tied his decision to his Christian faith, but he’d abided by the government rule previously. Greenhouse dryly noted that the owner also had no problem with the violation of Christian strictures when his employees used their salaries to purchase birth control themselves.

In a way, the Masterpiece Cakeshop case, in which a baker says his Christian faith prevents him from baking a wedding cake for a gay couple, is even more ludicrous, she said. That’s because the case has hinged on whether his First Amendment rights will be infringed upon if he’s forced to bake a cake for them. She noted that cake is a poor vehicle for arguments about freedom of expression.

Step Away, Don’t Step Between

Berlinger said that when it comes to medical treatment, there are actually very few cases in which medical personnel refuse to provide care. There may be instances when patients who are Jehovah’s Witnesses object to blood transfusions, and Orthodox Jews may dispute a doctor’s judgement of brain death.

But a bigger threat, she said, are structural issues, such as medical residents who simply opt not to get training for controversial procedures like abortion, and those who stall when faced with patients who inquire about physician-assisted suicide.

She said a conscience clause that the Hastings Center advocates says that even health professionals who feel more than the usual sense of “moral distress” that comes with working in the medical field must fulfill their duty of care. There’s no option to abandon a patient if their needs conflict with doctor’s conscience.

“You also cannot interfere with your patients’ access to care by others,” she said. “Sometimes the way this is explained is, ‘You can step away, but you can’t step between.”

She quoted British ethicist Alan Cribb, Ph.D., professor of bioethics and education at King’s College London, as having summarized it perfectly:

“We may exercise conscience objection to involvement in certain activities, but surely we cannot float entirely above the network of obligations in which we have emerged ourselves.”