skip to main content
Return to Fordham University
You are at:Home»Politics and Society»Cornel West and Adolph Reed on Reshaping Higher Education

In dual lectures that were at times analytic and at moments spiritual, Cornel West, PhD, and Adolph Reed Jr., PhD, questioned the health of American higher education and its purpose.

“To be educated is to be a certain kind of compassionate, courageous person willing to wonder with a sense of awe and raise questions that are unsettling,” West said at an April 6 event sponsored by the American studies program. “But a market mode of education is about schooling, getting assets to a skill, make some connections and hookups, so you can live large in some vanilla community.” 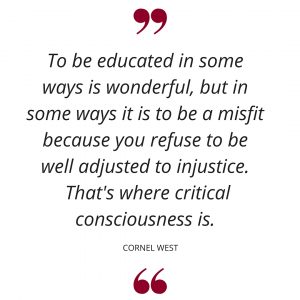 Reed, a professor of political science at the University of Pennsylvania, took an analytic approach to the state of higher education. He said an “intensifying upward redistribution of wealth” in America has profoundly altered the academic landscape from “K to PhD,” particularly as it relates to public education. He blamed both political parties for budget cuts that have forced educators to do more with less.

“We can’t let ourselves, our social imagination, and our moral capacities be shaped by what we can afford and we can’t afford, because the question immediately comes to who the ‘we’ is,” he said. “This idea of the ‘public’ is the key battle ground in American politics.”

He said education should be considered a public good in the same manner as parks, libraries, and the postal service—which he noted is also under threat. As such, a national conversation about public education that’s not mediated by the commercial news media is necessary, he said. He called the actual costs of publicly funded higher education “laughably cheap,” in the range of $85 billion.

And despite the lack of political will, publicly funding higher education is not a new idea, Reed said. After World War II the GI Bill helped absorb 8 million veterans into higher education—with tuition fees covered as well as a living wage stipend. But while he encouraged the funding of public education, the higher education conversation should not be about jobs. 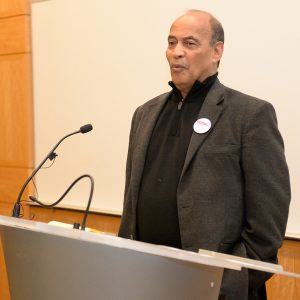 “The ‘human capital’ defense of higher education belongs to the for-profit colleges,” which, he said, contribute to the “steady debasement of what the public thinks education is.”

West, a professor at Union Theological Seminary and professor emeritus at Princeton University, took a spiritual approach to the subject. He contrasted those “public intellectuals who are up for sale” with those “deep, dedicated educators who are concerned with soul craft as well as state craft.” He then cited Socrates in saying that an “unexamined life is not a life for the human.”

“I know that at its best that is what Fordham is about,” he said. “That’s what I love about my Catholic brothers and sisters—they still believe in connecting us to certain classical conceptions.”

West said that he doesn’t care what ideology someone comes from as long as he or she “meets the Socratic text.” These are not market questions, but are instead questions of morality, spirituality, and integrity, a “humanistic affair.”

“Do we have what it takes today for that kind of democratic model of education? It’s a question of what kind human being are you going to choose to be. Are you willing to tell the truth? That’s what it is.”

He said that while Martin Luther King Jr. represents integrity to young people today, at the time of his death some 77 percent of Americans disapproved of him. And Malcolm X, “who everybody loves now,” only had 6 percent support among black people.

“To be educated in some ways is wonderful, but in some ways it is to be a misfit because you refuse to be well adjusted to injustice,” he said. “That’s where critical consciousness is.