skip to main content
Return to Fordham University
You are at:Home»Politics and Society»Conference Convenes Leaders Devoted to Combating World Hunger
A delegation from the Vatican, including Archbishop Paul Gallagher and Archbishop Bernardito Auza, gathered for the conference and a dinner at Fordham Law School.

In an address at the United Nations Food and Agriculture Organization last year, Pope Francis issued a challenge to find new ways to “confront hunger and structural poverty in a more effective and promising way.”

Archbishop Bernardito Auza, apostolic nuncio and permanent observer of the Holy See to the United Nations, opened the day’s events with a morning talk, and after a day of presentations, panels and workshops, Archbishop Paul Gallagher, secretary for relations with states at the Holy See, closed it out with a dinner address at Fordham Law School. 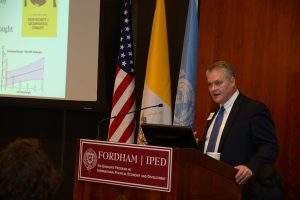 Economist Christopher Barrett, Ph.D., mapped out the challenges facing humanity in a morning presentation titled “Meeting the Global Food Security Challenges.”
Barrett, the Stephen B. and Janice G. Ashley Professor of Applied Economics and international professor of agriculture at Cornell University, was quick to note that the progress that’s been made on the issue of food insecurity over the last 50 years has been “nothing short of astounding.”

As recently as the late 1940s, he noted, his grandmother found herself in dire straits in the Netherlands in the immediate aftermath of World War II, something that’s inconceivable today, he said. Likewise, the number of children suffering from stunted growth has shrunk dramatically in recent years, thanks in part to the “green revolution,” which Barrett described as innovations during the 1960s, ’70s and ’80s in agricultural production technologies, improved seed varieties, improved varieties of inorganic fertilizer, and better water management.

“There are remarkable accomplishments in improving the productivity of the earth in producing the food to sustain people. Today we have more than six billion people getting enough dietary energy intake, which is a tripling over the course of my lifetime,” he said.

“But agriculture is a treadmill. There’s always a pressure carrying you backwards, and if you don’t run, you’ll get slammed into something behind you that you can’t see.”

Governments and industry grew complacent in the late 1980s and ’90s, he said, and slowed its investment in global agricultural research and development. The result is that global food prices hit their all-time inflation-adjusted low point from 2000 to 2002; today the cost of food is 50 percent higher than it was just 15 or so years ago.

Barrett said part of the problem is that research has returned to boost the productivity of wheat, corn and rice, but as human diets have improved, what’s needed more now are micronutrients such as vitamins and minerals. Today, for instance, the leading cause of blindness in children is simple beta keratin deficiency. When your grandmother told you to eat your carrots, she was serious, he said.

“But we need access to carrots. Fresh fruits and vegetables, animal-sourced fruits, the primary sources of the vitamins and minerals essential to an active, healthy life, don’t come from cereals, although there’s some remarkable improvements taking place through biofortification,” he said.

“Zinc deficiency, iron deficiency, these things are serious limitations of human performance, and this where we need to be focusing far more of our energy today.

“The old approach of grow the pile of rice, was important in the 1960s and ’70s. We’ve largely figured out how to do that, and we can’t take our foot off the pedal. But we need to be increasingly turning our attention to these other dimensions that we didn’t spend enough time on before.”

Another change from years past is that human suffering has also become much more geographically concentrated. The number of people who could be classified as the ultra poor, which is someone who subsists on 95 cents a day, has declined dramatically from roughly half a billion a generation ago, with about a 120 million of those people in Sub-Saharan Africa. Today, there are 150 million ultra poor, but the percentage in Africa has grown. Today eight out of ten of the ultra poor live in Sub-Saharan Africa, and in South Sudan, Yemen, and a small number of other nations.

Many encouraging trends are emerging thanks to innovations from both the private sector and governments, Barrett said. Genetic engineering, for instance, holds great promise, and he urged attendees not to dismiss it.
“How many of you want your grandchildren to eat banana or papaya? You have nearly no hope of that happening without genetic engineering. The papaya industry has been saved through genetic engineering against ring spot virus,” he said.

“It’s not that all of it is good, and you have to have careful regulatory controls over things. But why should we tie our hands behind our back when we have a big fight ahead of ourselves? Some of these technologies are going to be essential to us.”

Barrett was also optimistic about innovative projects underway that attempt to recover phosphorus, which can be used for fertilizer, from the bones of dead animals. Food loss and waste is unfortunately inevitable, so recapturing what is a necessary waste. Above all, he said, this is team sport.

“This is not something that anybody is going to solve individually. There are too many moving parts,” he said.

A Message from Pope Francis

At the dinner, Archbishop Gallagher was presented with a copy of Fordham University’s Pope Francis Global Poverty Index, a multidimensional measure of international poverty inspired by the pope’s address to the United Nations General Assembly in 2015.

In a statement issued Saturday by the Vatican, Pope Francis thanked Fordham for organizing the conference, noting that as with many of the social and humanitarian challenges confronting the international community, his approach to reducing hunger “is not based on mere sentiment or a vague empathy.”

“Rather, it is a call for justice, not a plea or an emergency appeal. There is a need for broad and sincere dialogue at all levels, so that the best solutions can emerge and a new relationship among the various actors on the international scene can mature, characterized by mutual responsibility, solidarity, and communion,” he said.