skip to main content
Return to Fordham University
You are at:Home»In the News»Climate Change is Real, Serious, and Worsening, says Panel

At a standing-room-only event this week at Fordham, Columbia University’s Jeffrey Sachs, PhD, had strong words about climate change:

“There is no real scientific debate . . . The facts are rigorously established and the risks are absolutely understood—but we have confabulated a political debate in this country. This is a reflection of our money politics beyond anything else, [including]the oil, coal, and gas industries,” he said.

“But that chokehold is coming unstuck. The public doesn’t want to be owned. And they know something’s not right.”

Sachs and Cardinal Óscar Rodríguez Maradiaga, SDB, Archbishop of Tegucigalpa, Honduras, were panelists for “Our Planet’s Keeper? The Environment, the Poor, and the Struggle for Justice,” an event sponsored by Fordham’s Center on Religion and Culture on Nov. 3.

The pope consulted more than 200 experts on these topics, yet Laudato Si has been met with strong criticism, said Cardinal Rodríguez. Some critics decry the encyclical and its condemnation of consumerism; others argue that the pope should refrain from political matters altogether. 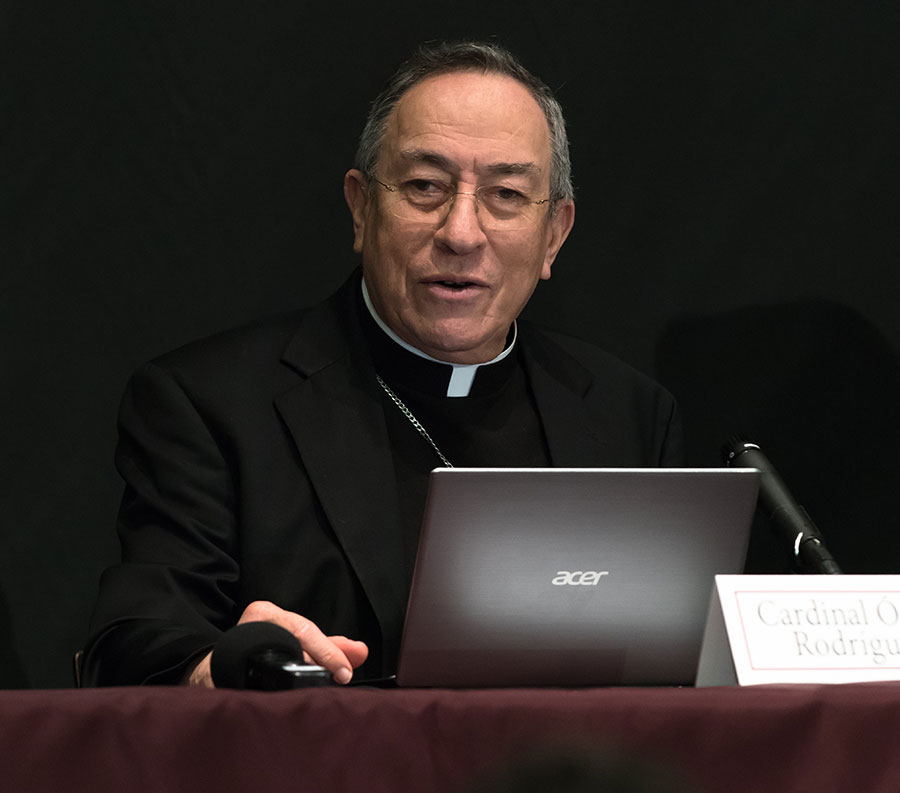 “This is wrong,” said Cardinal Rodríguez. “The encyclical talks about global warming in passing. Its main argument is that the earth is our common home. And every house needs maintenance—especially when we live in a house that is a little old.”

Our house, the cardinal said, is in dire need of repair. “California—rationing water. In Texas, there is terrible flooding. And here in the Northeast, look at this autumn—or rather, what a beautiful summer we’re having!”

Now more than ever the world needs the church’s moral leadership, said Sachs. As for whether a pontiff’s words could change the world, he offered a historical example:

In the spring of 1963, at the height of the Cold War, an ailing Pope John XXIII vowed to devote the remainder of his papacy to establishing peace. The result was Pacem in Terris, an encyclical that urged governments to recognize their civic responsibility for the well-being of the world and to situate power relations within a moral framework.

Two months after the encyclical’s publication, President Kennedy gave the commencement address at American University. Drawing on the encyclical’s push for a geopolitical moral framework, the president called for Americans to reexamine their attitudes about peace. The starting point, he said, should be the recognition that we are all human beings.

“We all inhabit this small planet,” Sachs said, quoting Kennedy, “we all breathe the same air, we all cherish our children’s future, and we’re all mortal.”

Upon hearing the “peace speech,” Nikita Khrushchev, first secretary of the Communist Party, called the U.S. envoy to Moscow and said: “That was the finest speech by an American president since FDR. I want to make peace with this man.”

“Framing the situation in a moral way is what pulled us back from the brink,” Sachs said. “Not game theory calculations, not talk of mutual assured destruction, not a list of what the other side has to do and here’s the red line—it was saying that we have to examine our own attitudes, because the other side is also human and they will make the same judgment.

“The encyclical played a fundamental role in shifting the world. And here we are today. It’s happening again.”