skip to main content
Return to Fordham University
You are at:Home»Politics and Society»Black Women Voters Key in 2020
Photos by Taylor Ha
As the 2020 presidential election approaches, black women—a key voting bloc—are starting to feel the spotlight.

Fifty-five percent of eligible black women voted in the Nov. 2018 midterm elections, compared with a national average turnout of 53.4%, according to the U.S. Census Bureau.

Christina Greer, Ph.D., associate professor of political science and Lesley Massiah-Arthur, GSAS ’12, ’13, associate vice president and special assistant to the president for government relations, spoke about the role of black women in the Democratic Party and the 2020 presidential election in a lecture at the Fordham Law School on Oct. 10. In attendance were faculty, administrators, and students—many of whom are now eligible to vote.

The hour-and-a-half-long lecture was sponsored by the Office of the Chief Diversity Officer. It was among the inaugural events of the Women of Color Initiative at Fordham launched last year, which encourages women of color to be in conversation with one another.

What Black Women Want to See in Politics

It wasn’t until 1920 that women in the U.S. were given the right to vote. But even then, there were obstacles for black women: the rise of Jim Crow laws, literacy tests, and even lynching, said Greer.

“It’s not until 1965 [with the passage of the Voting Rights Act]  really that black women are actually active members of the political process,” Greer said. “When you think about African Americans as a whole, we actually haven’t been voting in this country for much more than 50 years, realistically.” 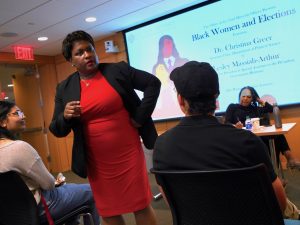 Since then, roughly 60 African Americans have run for president in the U.S., said Greer. Approximately 20 of them were women, including Charlene Mitchell and Shirley Chisholm—the first African American woman to be elected to U.S. Congress, said Greer.

What black women want to see in their 2020 presidential election candidates, said Massiah-Arthur, is a commitment to three things: gun reform, better health care, and the safety of their families.

“Being able to go into a church and kill people is now a reality. And when you consider the fact that the African-American political experience is one that is based in the black church, and that black women have always been most influential in that church … you’ve now come into someone’s home,” she said.

In the 2016 U.S. presidential election, 94% of black women voters supported Hillary Clinton, compared to 82% of black men and 42% of white women, said Greer.

Why Stacey Abrams Is Ruining Kamala Harris’ Shot at the Presidency

There is one woman of color among the current 2020 Democratic presidential candidates: Kamala Harris, senator and former attorney general of California. According to The New York Times’ latest analysis, Harris is one of the underdogs. 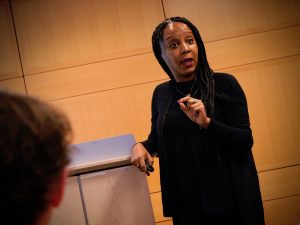 If not for the actions of Stacey Abrams, former Georgia House Democratic Leader—another woman of color—Harris might be doing better, said Greer.

The two women are very similar. They both attended historically black colleges and graduated from Yale Law School. But the similarities stop there, said Greer.

“Stacey decides to go to Georgia and organize poor people and help voters work on voter registration … [she goes]to the nether regions of the state of Georgia, where there’s barely any electricity or running water in multiple parts, and actually mobilize poor white people, poor black people, undocumented folks from Central America and Asia … She rises through the ranks and becomes the minority leader of the Democrats [in the Georgia statehouse],” Greer said. “Kamala, on the other hand, becomes the DA—which is a prosecutor—and then she becomes the attorney general for the state. One of her signature policies was to incarcerate parents if their children were truant … Her defense is no parents ever went to prison for this. That doesn’t matter. Someone taking off one day of work could’ve changed their lives forever, especially if you’re working an hourly wage job.”

If it wasn’t for Abrams’ success, said Greer, more people would be more lenient toward Harris.

“If we didn’t know that this career path could exist for black women, I think people could understand. You make concessions. That’s sort of how you get ahead,” Greer said. “But we’ve seen a different path. And I think that’s what’s making Kamala’s road so complicated and difficult, especially among black women of a certain age.”

At the end of the event, Greer advised the audience on how they could prepare for the 2020 presidential election:

Donate what you can: “I developed this concept called political tithing. I give money to candidates across the United States who I think—on local, state, and national levels—are contributing to a positive discourse in this country. For so many small races, small amounts of money actually can make a difference.”

Primaries matter: “Most people, especially young people, aren’t taught what primaries are. They think, I can just show up on Nov. 3. And then when they show up, they’re disappointed with the selections. The primaries are actually when you get to choose.”

Pay attention to statehouses: “That’s where the action is. There’s billions upon billions of dollars that pass through statehouses. People are deciding education policy, reproductive policy, environmental policy, whether or not public schools get funded properly.”

One of the biggest ways people can make a difference, said Massiah-Arthur, is within their immediate reach. By posting photos and thoughts online, people have the power to change the narrative of the political game.

“You live in an age where you actually get to be your own media,” she said, specifically addressing the students, who made up the majority of the audience. “Every time I turn around, there’s a ding, there’s an Instagram, there’s a Twitter. You guys will tweet about the most stupid things,” Massiah-Arthur said, to laughter. “But by the same token, you also have the capacity of sharing your views, as people of a certain age.”