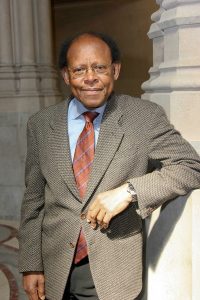 Fifty years after his assassination in Harlem, civil rights leader Malcolm X will be the subject of daylong conference co-sponsored by Fordham, “Liberation & the Legacy of Malcolm X Policing, Mass Incarceration, and Justice in the 21st Century.”

The program will focus on Malcolm X’s experience in the prison system, his commitments to education, liberation, and justice, and how his experiences might relate to the current challenges with policing, mass incarceration, and the persistent inequities they are both rooted in.

Aimee Meredith Cox, Ph.D., assistant professor of African and African-American Studies at Fordham, said the timing of the conference, which is also co-sponsored by the Shabazz Center, is particularly poignant.

“We’re in a very exciting and potentially transformative time globally, but particularly in the United States, in terms of how we think about the question of race and the problem of race and what it means for our students to understand that race is a social construction that also has very real lived consequences for lots of people in ways that reinforce social inequity,” she said.

Cone compared and contrasted Malcolm X with Martin Luther King Jr. in Martin and Malcolm and America: A Dream or a Nightmare (Orbis, 1992). He said that although King’s message of nonviolence won the day, Malcolm X’s voice is very much alive today, in the mood and spirit of the protests over the killings of Eric Garner, Michael Brown, and Trayvon Martin.

Whereas in the past, the approaches of the two men might have seemed divergent, Cone said that today’s activists embrace them both equally, like two sides of the same coin. The Twitter hash tag #blacklivesmatter, for example, can be connected to Malcolm X’s exhortations that blacks must love one other.

Cone further noted that, unlike the 60s-era Black Panthers, no one is taking up arms. That’s because King’s message of blacks loving persons of other color also resonates.

“You know you’re not going to win with guns so you don’t see people taking up guns in that movement today,” he said. “They follow King on that, but when they speak, they speak out of a rage that is closer to Malcolm X.”

For more information and to register, visit the event webpage or contact the department of African & African American studies at (212) 636-6360 or aaas@fordham.edu.