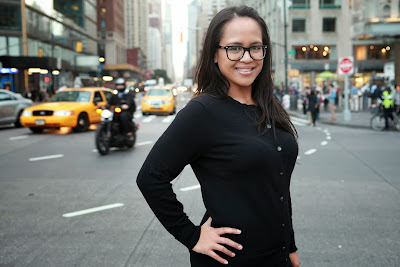 Scroggin took classes at all three of Fordham’s New York campuses to get her degree.
(Photo:Tom Stoelker)

Bobbie Scroggin, PCS ’12, is a veteran, a boxer, a mom, and philosopher—though not necessarily in that order.

After Scroggin left the U.S. Army, she had a two children, a girl in 2006 and a boy in 2007. Two years later she accepted a full-time position as administrative assistant at U.S. Military Academy at West Point. She filled what little spare time she had coaching the academy’s women’s boxing team.

When asked how she managed it all, she claims she had a doppelganger.

Eventually, Scroggin realized that she needed to shift the focus back to herself and her family. She began taking classes at Fordham’s School of Professional and Continuing Studies, and thus began an unexpected philosophical journey.

For Scroggin, Fordham offered a combination of location and well organized scheduling that allowed her to, in some cases, “knock out a whole class over five Saturday sessions.” For a single mom of two, PCS’s flexibility proved invaluable.

What she didn’t expect, however, was that the core curriculum requirement of two theology courses and two philosophy courses would alter the course of her studies and change her manner of thinking.

“I was like, ‘Aww, do I really have to take philosophy?'” she recalled. “But in the end I was really glad, and now that’s my major at Columbia.”

Since graduating from PCS with a bachelor’s degree in organizational leadership, Scroggin has gone on to pursue a master’s degree in philosophy and education at Columbia University’s Teachers College. She expects to graduate next year.

Given her experience living in Afghanistan, Germany, Hawaii, and her native California, Scroggin had a natural inclination to process events philosophically, but it wasn’t  until she came to Fordham that she embraced it as a discipline. She said her studies have informed her dating life, her work life, and her life as a mom.

“I subconsciously teach my kids philosophy, logic, and reasoning,” she said, joking that it has caused occasional discord.

“Now when my kids are arguing with me, they always ask me ‘Why?,’ or ‘What if you did it this way?'”

She said that at West Point, her colleagues sometimes need to remind her that she’s in the U.S. Army and the modus operandi there is to take orders.

“I always ask why, and my colleagues say, ‘Come on, we’re the Army–we just do!'”