skip to main content
Return to Fordham University
You are at:Home»Politics and Society»Are You Listening? Workshop Offers Strategies for Tackling Polarizing Conversations

It’s getting harder and harder to talk with others about divisive topics like abortion, gun rights, and the 2016 presidential election.

As part of Ignatian Week, on Nov. 1 Fordham Law students learned techniques designed to promote civility and reduce instances of talking past each other.

Camosy said he feels strongly about pro-life issues and animal rights, but said it is his goal to be in solidarity with those with whom he disagrees. He cited social psychologist Jonathan Haidt, who says that the positions we hold on the most controversial, polarizing issues are not often based on evidence and argument.

Instead, most of us hold a particular position because that’s the position of our “team,” or social group. 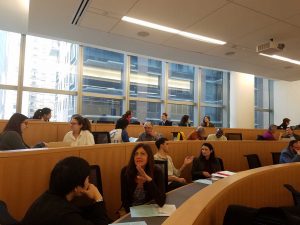 Students engage each other in dialogue.
Photo by Patrick Verel

“Because it’s based on teams, it naturally results in a binary,” said Camosy. “There are the righteous, who are on our team, and there are the heathens, who are on the other team. That dynamic, and not actually engaging with other people’s arguments, is what is foundational, and drives polarization.”

He said many people derive their identity more from being in opposition to the other “team” than from identifying with their own group.

“This cuts us off from our ability to listen,” he said. “Our identity is so invested in being against the other, that [it]produces the tendency to come up with caricatures and straw men.”

Uelmen said she was motivated to address the subject by the tears of her friends in her own religious community. During the 2004 presidential election, they tried to engage each other but were torn by the fact that some members felt the others were literally going to hell because of their political choices.

The presenters offered a five-step practice for starting and maintaining conversations that are difficult, in order to reach a point of peace and acceptance of the fact that understanding is not the same thing as agreement. Participants were instructed to engage one another about a controversial topic, and to:

—Approach the conversation from the perspective of basic respect, in the spirit of Pope Francis’ suggestion that “We remove our sandals before the sacred ground of the other.”
—Unplug from social media and stay focused on person-to-person interaction.
—Give the person on the other side an “out,” by using phrases like “maybe I don’t understand” or “maybe I need more information.” That way you don’t box anyone into a corner.
—If you learn something new during your conversation, express your gratitude.

One student participant wondered what one should do when a person is not interested in meeting you halfway in any fashion. Camosy suggested that you decide ahead of time that you’re not going to try to “win” the debate. You can even inform the other person that you just want to understand what they think and why they think it.

“It does take a bit of discipline to say ‘I’m not in this to win the conversation,’” he said, “’[but rather]to listen to somebody, take my shoes off, and understand their experience.’”

Hear what students had to say about healing the nation’s political divide: