skip to main content
Return to Fordham University
You are at:Home»Inside Fordham»Alumnus Tapped to Head CIA in New Obama Administration 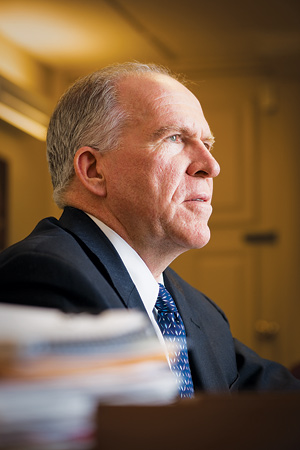 Brennan, a 25-year veteran of the agency, is currently the deputy national security adviser for counterterrorism and homeland security.

“John Brennan’s career of service and extraordinary record has prepared him to be an outstanding director of the CIA,” said a White House statement.

“Since 9/11, he has been on the front lines in the fight against al-Qaeda. Over the past four years, he has been involved in virtually all major national security issues and will be able to hit the ground running at CIA.”

During his time working for the administration, Brennan has been involved in variety of security issues, from the 2011 raid that killed 9/11 mastermind Osama bin Laden, to counterterrorism efforts in Somalia and Yemen.

Previously, he served as Middle East station chief for the CIA in Saudi Arabia and as chief of staff for agency director George Tenet. He was soon named CIA deputy executive director. After 9/11, Brennan established the precursor to the National Counterterrorism Center, tasked with coordinating international intelligence from myriad agencies.

It was during his time at Fordham that Brennan, a political science major at Rose Hill, became interested in Islamic culture. He traveled first to Indonesia as a freshman, then to Egypt his junior year, where he studied at the American University in Cairo and learned to speak Arabic.

The experience gave him a personal connection to Islam and to Muslims at home and abroad. Brennan has publicly objected to the use of the word “jihadists” to describe terrorists.
“Jihad is a holy struggle, a legitimate tenet of Islam,” he has said, stressing that violence and murder are not condoned by the religion.

For his unyielding commitment to protect the United States, and his three decades of public service, he was presented an honorary degree at Fordham’s 167th Commencement on May 19, 2012. In accepting the honor, he recalled that his studies resonated with him to this day.

“The textbooks I read and the papers I wrote in John Banja’s philosophy class have traveled and remained with me over the past 35 years,” he said.

“I have reread them many times as I have struggled with the real-world application of the concepts that I learned about as a 20-year-old.”

If confirmed, Brennan will become the second Fordham alumnus to head the CIA, following William J. Casey, FCRH ’34, who ran the agency from 1981 to 1987.