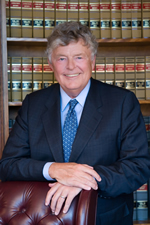 On March 25, 1965, Martin Luther King Jr. led thousands of nonviolent demonstrators to the steps of the state capitol in Montgomery, Alabama, after a five-day, 54-mile march from Selma. There, the Student Nonviolent Coordinating Committee, the Southern Christian Leadership Conference, and local African Americans had been campaigning for voting rights.

Some Fordham students and administrators were among the marchers. One of them was Ward Cleary, FCRH ’66, LAW ’69.

What prompted you to travel to Selma?
I was pretty incensed about what was going on down there. I’m not particularly liberal, but when people were shot, nobody seemed to care about bringing the guilty to justice. 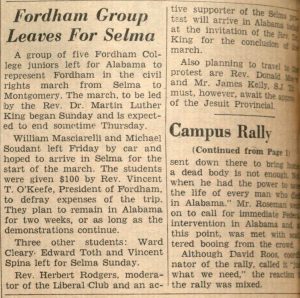 What do you remember about the trip?
I remember that someone else had the idea to ask Fordham’s president [Vincent T. O’Keefe, S.J.] for travel money, and he gave us each $100. We took the train down, and there were some volunteers down there who met us. We were there for four or five days, and we just helped out, dispensing food and things like that.

I remember marching. When you looked out, there were a lot of onlookers on the sidelines who were sullen. No one was cheering. At every corner there was a local policeman, and next to him, someone from the state police, and next to him, [a member of] the National Guard. There were three levels almost everywhere, because most of the authorities were hostile to this march and to the black movement. These big farm guys came from out of the crowd and started beating on some African-American that they knew. They were pulled off, [but] not arrested or anything.

After the march, there were speeches and a concert. The groups were huge, and I wasn’t close enough to hear or follow anything that well. I took a bus back, and I was alone at that point. It was pretty obvious I was a student and was probably down there for those purposes. But people I talked to on the bus were nice enough. Even when they didn’t agree with me, they were pleasant.

Had you participated in a protest before this?
No, I was fairly nonpolitical. But you heard on the news about bombings and murders, and there was no real pursuit by legal authorities. It was something that really bothered me. That’s what got me to go down there and protest.

Did you ever protest anything after that?
In 1970 and 1971, I worked in Washington, and I was in one antiwar march. By then, the war was pretty unpopular. But that was it for me. As I said, I never considered myself political. But some of these things just get you angry.

What was it like when you came home?
I feel like I was part of a movement that was good. I’m glad I went. But I never thought of it as, ‘Gee, I got something done.’ It was just a way to get your views across. There were some risks, in retrospect, but … either I didn’t know or I didn’t care. I thought it was worth doing.