skip to main content
Return to Fordham University
You are at:Home»Campus Life»After Decades of Stalemate, a Homecoming: Students Make First Visit to Cuba Since Normalization

Growing up in Atlanta, Sofía Muñoz used to hear her grandparents reminisce about a certain boardwalk in Havana where the two of them would stroll along the Gulf of Mexico, the sounds of conga and rumba music drifting toward the coast from the bustling city.

After decades of stalemate between Cuba and the United States, Muñoz, FCRH ’15, figured she would probably never see the country of her family’s origin, from which her grandparents emigrated in the 1960s.

So, when she saw that Fordham’s Latin American and Latino Studies Institute was offering a course study tour to Havana, she jumped at the opportunity.

“My grandparents had told me so many stories about it—and suddenly I was there,” said Muñoz, who graduated on May 16. “Walking [along that boardwalk]was intense. There were so many emotions. I have chills just thinking about it.”

Muñoz was one of 19 undergraduate students who traveled to Havana last semester. It was the first group of Fordham students to do so since the United States and Cuba announced normalization in December 2014.

The course, Contemporary Cuban Culture, explored the renewed importance of Havana as a vibrant contemporary cultural scene and introduced students firsthand to the music, art, dance, literature, and film that have emerged amidst Cuba’s transition to a globalized world market. The students stayed at Cuba’s premier cultural institute, Casa de las Américas, and took classes with Casa faculty.

For some students, the trip offered a perspective of the island nation to which few American students have had access. 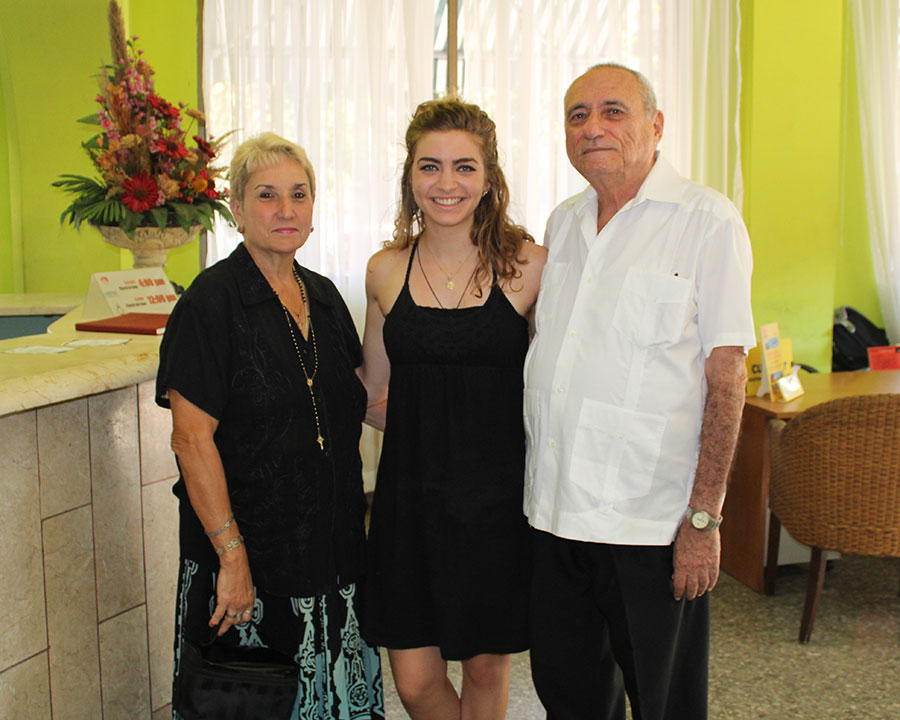 Sofía Muñoz with her grandfather’s cousin Joaquin Touirac and his wife, Noly.

For others, like Muñoz, the trip connected them to a heritage known only through family lore.

In Havana, Muñoz met her grandfather’s cousins (her only relatives left in the city) for the first time. She had contacted them via email before she left and had made plans to have dinner with their family. The reunion was powerful, Muñoz said. At her great-cousins’ house, there were pictures on the walls of her grandparents and her father.

“I’ve gained a greater consciousness about my identity and my roots,” Muñoz said. “It also helped me not to see things in black and white. When my grandparents left … in the early 60s, they’d lost everything. So I had grown up with this dichotomous version of Cuban history. But then I met the family members who had decided to stay and heard [their stories about Cuba].

“The experience helped me to see that you can’t reduce a person to just one identity. It’s about seeing the whole person. That’s something that I’ve also learned by being at Fordham.”

The theme of seeing individuals and situations in all of their complexity surfaced often throughout the study tour, said course instructor Arnaldo Cruz-Malavé, PhD, professor of Spanish and comparative literature. Not only did students gain a more nuanced understanding of U.S. and Cuban relations, but they also experienced the frictions within Cuban society itself.

“Havana is a city of great economic tensions,” Cruz-Malavé said. “The whole discourse of the Cuban revolution had been about equality—and in some spheres that was accomplished, most notably in education and health. But then came the collapse of the Soviet Union, which subsidized the Cuban economy, [followed by]the deterioration of the Cuban economy in the 90s.”

The economic collapse forced Cuba to rely on the tourism industry, which did help to revive the economy. However, it also introduced foreign currency into the country, such as euros and Canadian and American dollars, which are significantly more valuable than the Cuban peso. The competing currencies have created a gap between those with access to foreign money and those without access—in essence, a gap between foreign tourists and Cubans.

“The students had read about this inequity, but there’s nothing like being there and realizing … that you, as a tourist, have access to things that Cubans do not,” Cruz-Malavé said.

Cruz-Malavé recounted an instance when a small group of students attempted to visit the Jose Martí Memorial Museum with a young Cuban they had met. The guards at the museum allowed the Fordham students to enter, but not the Cuban student—tourists only, they said.

In response to these inequities, the students opted for solidarity, Cruz-Malavé said—for instance, forgoing tourist restaurants and dining instead at paladares, family-run restaurants that often operate right within a family’s home.

Most importantly, he said, they went straight to the source to find out what life is really like in Havana.

Travis Hernandez, a rising senior, said that one day he joined a group of boys playing basketball. At the end of the game, one of the boys invited Hernandez to have dinner with his family.

“When we got to his home, the door was already open… which surprised me, because where I grew up in New York City, that’s not something you do,” Hernandez said.

“That little gesture—keeping the door open—meant something. It said a lot about the open community there.”